Florida’s Palm Beach Post first began publishing in 1908 under the name Palm Beach County, but in 1916 (by this time called the Palm Beach Post) the paper made the switch from running weekly issues to being a morning daily.
As the self-proclaimed official paper of the city of West Palm Beach and Palm Beach County, the Post ran many interesting articles, editorials, and cartoons over the years, reporting on issues and events that were important to the county’s residents.

For example, in September 1928, the Palm Beach Post covered the Okeechobee hurricane, which made landfall not far from West Palm Beach. While the hurricane itself was deadly and caused much damage, also extremely threatening was the storm surge caused by Lake Okeechobee overflowing its dike, which resulted in flooding over hundreds of square miles—up to 20 feet high in some places. Altogether, the storm caused more than 4,000 deaths. A few days after the hurricane, the Post reported on a family who survived because their house had floated in the floodwaters. The wife is recorded as saying, “The wind seemed to change and I stepped off the porch and immediately disappeared in water over my head. […] Our house was afloat, it floated for more than half a mile.” 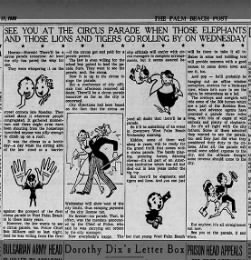 Another item of local interest ran in October 1938, when the paper followed the local upset surrounding a canceled circus parade. A circus had come to town, and there was much discussion about whether the circus would be able to parade its animals through town as part of the show. When the city decided last minute to allow the parade, excitement was high; but disappointingly for the local kids, the circus decided not to hold a parade, as it would conflict with the afternoon performance. The Post ran an editorial the following day that piled on the guilt, remarking, “Sometime the guy who gave the order to cancel the circus parade yesterday will remember a crying kid along the curb, and he’ll wonder if the money he saved was worth it.”

If you have family or ancestors from the Palm Beach area, you might find them in the Post in “personal mention” columns, news of local WWII servicemen, engagement announcements, death and burial notices, birth announcements, society and club news, court records, school honor rolls, or maybe even lists of candidates running for local office—just to name a few!

Get started searching or browsing the Palm Beach Post on Newspapers.com!