If you’ve been keeping up with the history-packed time travel drama Timeless, you’ll recognize the reason for today’s post. This week the show tackled the battle of the Alamo, an ill-fated last stand that took place in what was then called San Antonio de Béxar in February and March of 1836. Though small pieces of the true history were changed in the show (thanks to the meddlesome, time traveling antagonist), for us the history of the Alamo remains the same—a poignant piece of Texas’ past that inspired an army and led to the eventual end of a deadly revolution. 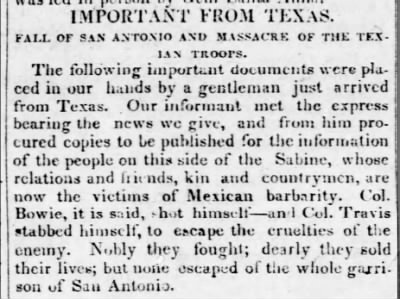 The Alamo was a garrison of the Texian Army, though fewer than 100 men were stationed there by January 1836. By early February a few score reinforcements had arrived, along with Colonel James Bowie and the legendary Davy Crocket. Bowie and cavalry officer William Travis shared command of the men at the Alamo.

By February 23, 1500 Mexican Army soldiers had settled in around Béxar and the few hundred Texians at the Alamo who refused to surrender. A 13-day siege followed, during which Travis wrote the now-famous letter that was given hefty focus in Timeless. His letter and multiple others were only successful in gathering another 30 or so men; meanwhile, the Mexican army received another 1000 reinforcements which left them sitting pretty with a force of about 3100 men. The situation was dire, and Travis began to prepare his men to die nobly for their cause. 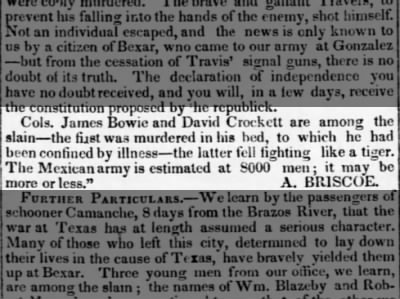 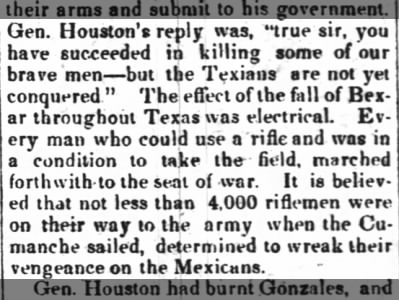 The army raised in reaction to the news eventually drove the Mexican army from Texas in late April, spurred on by the memory of their fallen comrades at the Alamo.

Find more about the events at the Alamo as reported in the papers with a search on Newspapers.com.