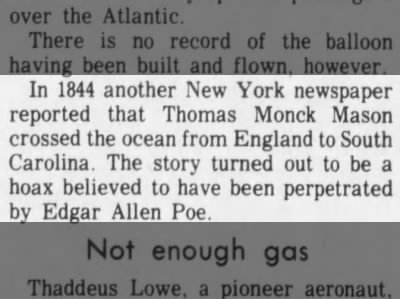 In 1844, writer Edgar Allan Poe sent The Sun, a New York newspaper, a story about an incredible balloon trip across the Atlantic. The feat was accomplished by famous balloonist Monck Mason and took only 75 hours. Incredible detail was given in the submission, including facts about the balloon’s dimensions and diagrams of the craft, and real people were cited in the story. The problem, of course, was that The Sun printed the story as news when it was entirely untrue. 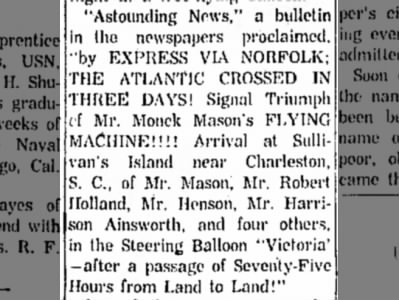 Even Monck Mason, the main character spoken of in the story, was not a real person, though he was apparently based strongly off of Thomas Monck Mason, a real-life balloonist. The true Mr. Monck Mason did not, however, manage a 3-day Atlantic balloon adventure.

The fabricated news story prompted plenty of attention for the newspaper. People were infatuated with the idea that aeronautical travel had progressed so quickly, but the first real trans-Atlantic lighter-than-air craft flight did not happen until 1919 and took four and a half days from start to finish.

You can find more interesting stories like these on Newspapers.com. Try a search for something that interests you using this search page.