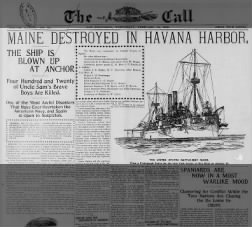 On February 15, 1898, at 9:40 p.m., the battleship USS Maine exploded then sank in Havana Harbor, killing about 260 of the 355 men on board. This international disaster, which was blamed on Spain, became an important catalyst for the Spanish-American War.

At the time, Cuban guerillas were engaged in a brutal fight for independence from Spain. Riots in Havana in January 1898 prompted the United States, which supported Cuba for both humanitarian and imperialistic reasons, to send the Maine to Havana as a show of strength. The ship, commanded by Captain Charles Sigsbee, arrived on January 25 and sat quietly in the harbor for the next few weeks. 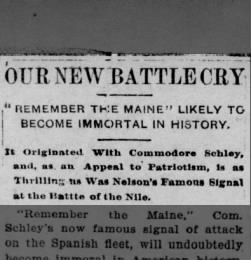 But on the night of February 15, two explosions rocked the ship, sinking the Maine. The casualties were predominantly among the enlisted men, as they were quartered in the forward part of the ship, where the explosions occurred.

Although there was no hard evidence that the sinking was caused by the Spanish, a sizeable portion of the American public began clamoring for retribution almost immediately, spurred on by “yellow press” accounts that focused on sensationalism more than fact. “Remember the Maine!” quickly became a rallying cry.

An official U.S. court of inquiry was set up soon after the loss of the Maine to investigate the cause. Its findings, which did not assign blame, revealed in March that the sinking was caused by an underwater mine, which had led to the explosion of the forward magazines. Under pressure from all sides, the pro-peace William McKinley finally saw war with Spain as inevitable (for a number of reasons, though the Maine was the most visible instigating event). President McKinley asked Congress for a resolution of war, which was declared on April 25. 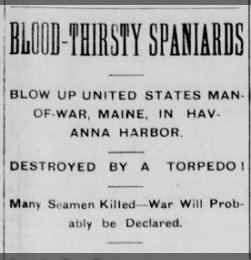 In later years, two other major investigations into the loss of the Maine were completed. A second official investigation in 1911 came to the same conclusion as in 1898: the Maine had sunk as the result of a mine. However, an investigation led by Admiral Hyman Rickover concluded in 1976 that the explosions were caused by a coal-bunker fire adjacent to one of the ship’s magazines. Disagreement and speculation on the cause of the sinking continues to this day.