“You see the drug was so deceptive that while under its influence I could work and be free from pain, so instead of laying up and letting Nature do her work and cure me, I kept taking the injections until the pain would grow worse when I was completely from under the influence. […] The first thing I knew I could not do without it. I was compelled to take it night and morning to be at all comfortable. Then as I used it, I was not content to simply have enough to keep me free from pain. But like that fire, when once kindled, it grew in force and strength.”

These are the vivid words of a man struggling with opioid addiction. However, they don’t come from the pages of a modern newspaper. They come from an 1878 issue of the Chicago Tribune.

19th-century woman buys morphine from a druggist. From the Philadelphia Times, 1899

In the 19th-century, opium-based patent medicines such as laudanum and paregoric were popular solutions to a wide-range of ills, from coughs, to aches and pains, to diarrhea, to the euphemistic “female complaints.” In fact, many of the opioid addicts during the late 19th-century were women, particularly white women of the middle and upper classes, who became addicted after being prescribed opium-based medicines by their physicians.

These opioid-saturated medicines were widely available, with ads for them appearing in newspapers around the nation. One such medicine, Mrs. Winslow’s Soothing Syrup, was geared toward young children and promised to not only soothe teething babies but also claimed it “corrects acidity of the stomach, relieves wind colic, regulates the bowels, and gives rest, health, and comfort to mother and child.” The fact that it was laced with opiates wasn’t mentioned.

The Civil War introduced a new demographic of opioid addicts: soldiers. Morphine, derived from opium, had been around since the early 1800s, but the introduction of the hypodermic syringe into mainstream medicine around the time of the Civil War made it possible for military doctors to easily treat wounded soldiers without the side effects of orally administered opioids.

When the soldiers returned home, some of them returned addicted to the morphine administered to them in hospitals, while others became addicted after the war as a way to treat the chronic pain resulting from war wounds.

So how was the 19th-century opioid epidemic resolved?
In the late 19th century, medical professionals began to realize the detrimental effects of opioids. “Who is responsible for […] morphine victims?” asked a doctor in an 1892 issue of the St. Louis Post-Dispatch. He then answered his own question: “The physician and the druggist, most largely.” 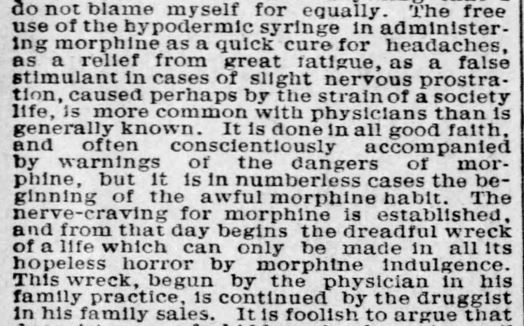 The role of physicians and druggists in morphine addiction. From the St. Louis Post-Dispatch, 1892

As awareness of the dangers grew among doctors and pharmacists, opioids were prescribed less often and became less freely available, which helped lower the number of new addicts. This, combined with state and federal regulatory legislation, helped eventually end the epidemic.

Of course, just because the 19th century epidemic ended, it didn’t mean opioid abuse was completely eliminated. Abuse continued on a smaller scale, complicated by the introduction in the late 19th century of an opioid marketed as a safe alternative to morphine: heroin.

1. Report of The President’s Commission on Combating Drug Addiction and the Opioid Crisis, 2017, p. 113.
2. Number calculated from data provided by the National Survey on Drug Use and Health and the US Census Bureau for 2016.