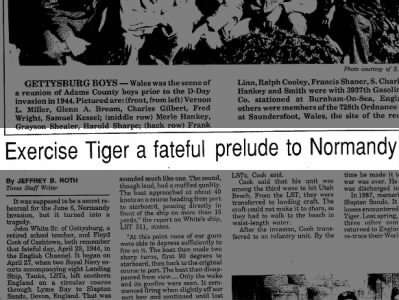 June 6, 2014, marks the 70th anniversary of D-Day, the well-known start of the Normandy invasion and one of the major contributions to the eventual Allied victory in WWII. But this event, codenamed Operation Neptune, was preempted by another operation which acted as a practice run for that fateful day on the beaches of France—Exercise Tiger.

In preparation for one of the biggest amphibious military operations of all time, landing exercises happened with fair frequency in the months leading up to June 6, 1944. The plan for the actual invasion was to hit five sections along 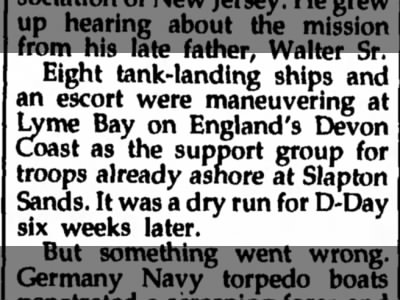 a 50-mile stretch of Normandy’s shores; these were called Sword, Juno, Omaha, Gold, and Utah beaches. All aspects of the forthcoming invasion were practiced, from the wait as the boats sailed across the channel, to the heart-pumping sound of live fire from enemy forces. And of course, all of these elements were also trained for in Exercise Tiger, the name of the dry-run for those storming Utah beach specifically.

A training ground was established in England’s Devon county, where Slapton beach is found. The Slapton and Utah beaches were extremely similar in terrain—fairly narrow strips of gravel backed by grassy bluffs. Slapton and the surrounding area was evacuated to ensure civilian safety during training and practices, which began months in advance of the D-Day invasion, all leading up to Exercise Tiger in April 1944.

On April 26 the first assault troops began the journey that simulated crossing the channel, rounding the south of England in their tank landing ships (LSTs) and gliding into Lyme Bay. 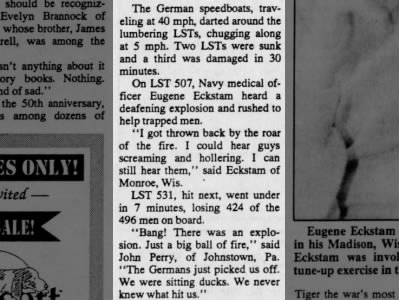 The bay training area was patrolled by Royal Navy destroyers, Motor Torpedo Boats and Motor Gun Boats. The first wave landed successfully, though apparently some miscommunications led to friendly-fire casualties and radio communications issues. This also contributed to the fact that the second wave, approaching in the early hours of April 28, did not fare as well as the first. The convoy was attacked by nine German E-boats who had slipped past the protective ring of ships.  Some of the bombarded LSTs sunk within minutes, unfortunately for the men on board. By the time the E-boats stopped their attacks and the last troops had made it to shore over five days later, more than 700 men had perished—many from drowning—in the costliest training exercise involving U.S. troops during WWII. 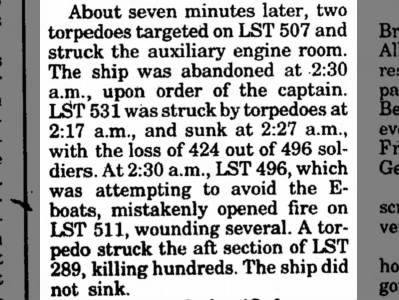 While Exercise Tiger was not an obvious success, perhaps it did offer some help as intended—making the men accustomed to conditions and quick thinking under fire. The appalling outcome did little to encourage hopes for success, but it turned out that, on Utah Beach at least, the D-Day invasion went much more smoothly than the exercise. There were still terrible casualties, but they were significantly lower than on that April day of training.

For more on this little-known event, look at this search of “Exercise Tiger” on Newspapers.com. You can also use this search for more about D-day and the events surrounding it. Or try the search or browse pages to find articles of past events about your family, friends, or interests.

One thought on “Exercise Tiger”