The Tribune was initially handed out for free, but it quickly garnered a wide subscription readership. Although the paper originally intended to remain politically independent, that changed when it was acquired by a new owner in 1876 and over the decades evolved into a powerful Republican paper that could make or break political careers. 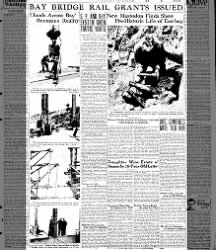 Looking through the early issues of the Oakland Tribune, you’ll notice that issues were only four pages at first, though it expanded as advertising and other demands grew. Along with an abundance of ads, the early Tribune mostly carried articles on local topics, whether big (like the burning down of the city hall) or small (like the need for drinking fountains due to temperance). But you can also find topics of wider historical importance in its pages, like the effects of the Great San Francisco Earthquake on Oakland’s politics and population.

In later years, the scope of the Tribune widened to national and international news, but it still featured newsworthy local events like the completion of the San Francisco-Oakland Bay Bridge and the murder trial (and mistrials) of Black Panther leader Huey Newton. It also still found room for items of purely local interest, like this gem of a column from 1974 about the 9 most attractive men in the Oakland area.

In addition to the headlines, the Tribune also included the typical marriage, death, birth, and divorce announcements. You might also find the names of your Oakland-area ancestors among the lists of real estate transactions, undelivered letters and telegrams, school reports and honor rolls, overland train arrivals, guests at the Grand Central Hotel, or even police arrests.