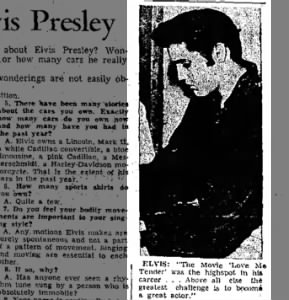 November 15th, 1956, was the day the film Love Me Tender premiered, featuring none other than 21-year-old Elvis Presley. Originally called The Reno Brothers, the title of the film was changed to capitalize on Presley’s famous tune, which Presley sang during the movie in the role of the youngest Reno brother, Clint. Presley hoped the film would be his first step on the road to becoming a serious actor, one of his dreams. Unfortunately for the famous singer, Love Me Tender was just the first in a long string of musicals in which his beloved songs were used to garner attention for the films. The public wanted his music, not a new James Dean. 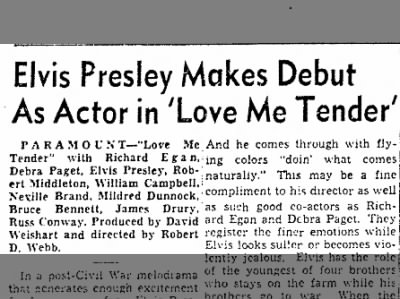 Still, regardless of Presley’s own disappointment in his role as the famous face on the posters, his movies, including Love Me Tender, were box office hits, selling out almost as quickly as his albums. In fact, Love Me Tender was the first movie ever to recover its initial investments in just three days. It wasn’t long before Elvis was perpetually cast in the role of the dashing young love interest with a talent for song. It wasn’t what he wanted, but Elvis certainly loved to entertain and continued to do so through both movies and music for years. 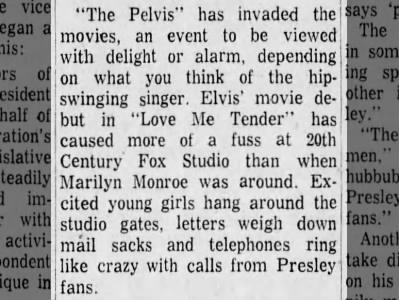 Presley’s movies aren’t considered the greatest of all time, but they definitely have their fair share of fans. Are you an Elvis Presley fan? Were his movies or his music more to your taste? Let us know, and if you’re interested in more articles about anything Elvis related, see what else you can find on Newspapers.com.