“Give Up or Give In!”: Advertising during World War I 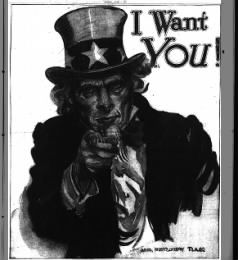 Following the creation of the Committee on Public Information in April 1917—and especially its advertising division in January 1918—official propaganda for World War I spread like wildfire. In fact, pro-war propaganda became so prevalent that it began seeping into a myriad of aspects of daily life—including newspaper advertising.

Some ads were for products with an obvious connection to the war, such as the omnipresent advertisements for Liberty Loans. These ads often echoed the sentiments seen on propaganda posters, using patriotism and pride in equal measures with guilt and even fear to persuade newspaper readers to purchase Liberty Bonds and War Savings Stamps to help fund the war effort. For instance, one Liberty Bond ad made it clear that it was either “give in” and participate in the Liberty Loan or “give up” hope of winning the war. Another ad asked “What is YOUR standard of patriotism? . . . In an hour like this it is not true patriotism to give merely what we don’t need. True patriots will sacrifice.” 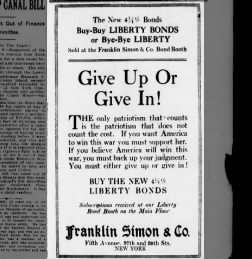 Then there were the ads in which advertisers found ways to associate their everyday products and services with the war effort. Nemo Self-Reducing Corsets used this technique in an ad that stated, “Women who work, especially those who are doing unaccustomed war-time labor, must guard their health to retain their efficiency. Therefore, Nemo Self-Reducing Corsets are now, even more than ever—a national necessity!”

Likewise, ads that demonstrated support for America’s soldiers also became a popular marketing tool. A classic example of this is a Wrigley’s gum ad that underneath an image of a soldier hugging his mother reads, “He’s telling her that nothing he received from home brought him more joy, longer-lasting pleasure, greater relief from thirst and fatigue, than Wrigley’s.” 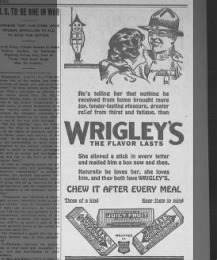 Another way ads capitalized on the war was by referring to Herbert Hoover’s request as head of the U.S. Food Administration for Americans to conserve certain kinds of food, such as wheat. Such an ad for a Roberts & Leahy store advertised, “Eat more potatoes and less wheat products and you will be doing a little bit more to help our own boys over there. We will help you do your bit of saving by selling potatoes so cheap you can afford to eat more of them and less wheat products.”

Whatever their technique, ads like these counted on Americans’ patriotism—and the newspapers’ increased wartime readership—to sell their products. Have you come across any interesting wartime ads or propaganda in the papers on Newspapers.com? Tell us about it! Or clip and share them with your family or friends.

8 thoughts on ““Give Up or Give In!”: Advertising during World War I”