The President at Gettysburg 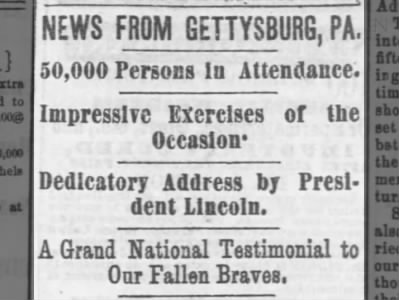 It’s been over 150 years since the president stood before an audience of thousands and proclaimed the words, “all men are created equal,” but President Lincoln’s address just four months after the battle of Gettysburg still remains one of the most memorable speeches in American history. Brief and stirring, the speech was given as part of a ceremony to consecrate a new cemetery for the thousands of men who had died in that terrible battle. Lincoln’s words only lasted about three minutes, in contrast to the hours of speeches that preceded him, but it clearly defined Lincoln’s vision of winning not only victory for the Union, but unified freedom for everyone: “that we here highly resolve that these dead shall not have died in vain—that this nation, under God, shall have a new birth of freedom—and that government of the people, by the people, for the people, shall not perish from the earth.”

Lincoln’s full speech was reprinted many times in newspapers throughout the country. Here is just one version (click to make the image larger): 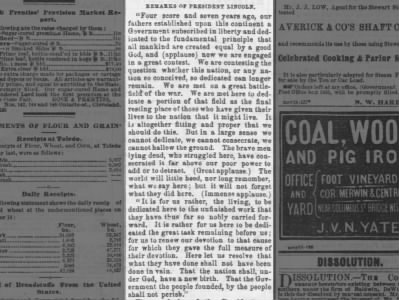 More on Lincoln and the Gettysburg Address can be found on Newspapers.com. Try narrowing down the dates for more contemporary articles, or see how the newspapers refer back to the occasion over the years with a broader search.