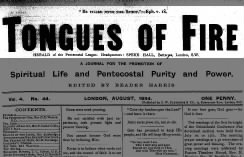 In addition to millions of editions of more than 1,700 U.S. newspaper titles on Newspapers.com, the site also hosts 41 titles published in England, bringing you over 650,000 pages of news from abroad between 1700 and 1921.

In addition to rather well-known papers like The Guardian and The Times—the two together making up the vast majority of our British holdings—there are lesser-known publications with much smaller runs now online. In the tradition of their day, these 18th- and 19th-century titles are inundated with large and enticing advertisements, providing today’s readers with entertaining insights into the products and fashions of the time period.

Some of the more eclectic and unusual titles include The Librarian, The Pottery Gazette, The Post Boy, and Tongues of Fire, the herald of the Pentecostal League. The Wife: A Journal of Home Comforts is not directed at the uxorial audience its title suggests, but rather is a diverse array of news concerning commodities, manufacturing, and agriculture. It is entertaining, too, as can be seen in this story of Henry Cheesebro’s battle with a 378-pound “maddened sword fish” off the coast of Connecticut in 1893.

The American Settler, from the early 1890s, is “a guide to British emigration and settlement in North America” complete with a column on American Humor. To give readers an idea of the scope of places to which they may wish to emigrate, the newspaper prints a handy map of the U.S. on the front page of every 8-page issue with a list of states and European countries according to area. Letters from heads of families that settled in California enhance advertisements drawing settlers to colonies with fine grape and alfalfa lands north of Fresno. 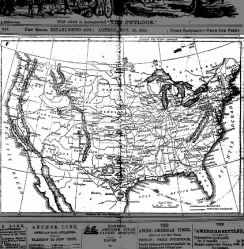 In the Times, we see the other side of the War of 1812 in this letter written from Fort George to the British Secretary of War, reporting on the capture of Detroit. Or, we can read the British take on less weighty matters affecting Americans like Mary Pickford’s divorce and incidents of liquor smuggling during Prohibition.

Foreign and Colonial news is reported regularly in the Guardian, typically concerning trade and politics, with a bit of gossip mixed in for good measure. Occasionally, the United States gets top billing as in the beginning of this political report regarding strengthening the military armament of the country after the U.S. Civil War. Biannually, you’ll find indexes to items published in previous issues like these for January-June 1894 and July-December 1895.

In addition to giving us retrospective glimpses of bygone eras in Great Britain written in the language of the day, these historic papers, published abroad, provide intriguing perspectives of how the world viewed America, our politics, entertainment, military prowess, and industrialization. Take your journey back in time to another country via Newspapers.com’s British newspapers.