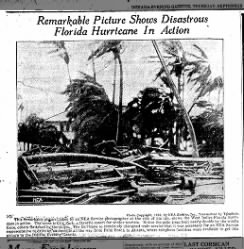 We’re in the midst of the 2013 Atlantic hurricane season. Eighty-five years ago, in 1928, before hurricanes were officially named, a storm known as San Felipe II, the Storm of ’28, and the Lake Okeechobee Hurricane killed over 5,000 people in Puerto Rico and Florida. The climactic climatic news filled our nation’s headlines. It remains the second deadliest tropical storm in U.S. history.

The hurricane hit Puerto Rico (spelled “Porto Rico” in the newspapers of the day) on Thursday, September 13, made landfall near Palm Beach, Florida, on Saturday, September 15, and continued to Lake Okeechobee where its impact was devastating.

Galveston, Texas, the site of the worst hurricane in U.S. history in 1900, reported early estimates of the death toll rising into four figures even before the full impact of the Lake Okeechobee flooding was known. A front-page article in The Indianapolis News on August 15, 1928, proclaimed “Lake Okeechobee Now Florida Sea” when Florida’s largest lake grew to become an inland sea when a storm surge breached a dike, a scenario all too familiar to those who survived Hurricane Katrina eight years ago. Early estimates of lives lost were under 2,000, yet current tallies put the figure closer to 2,500.

Estimates of fatalities in the Caribbean approached the same number. The Portsmouth Daily Times of Ohio reported that thousands were dead and as many as a million, or half the island’s population, were homeless. Famine was a very real concern. A descriptive first-hand account by a boy in Puerto Rico was published a couple weeks later in Maryland’s Denton Journal. Two months afterward, The Indian Journal of Eufaula, Oklahoma, reported that Americans raised $5 million in relief for the victims.

The Reading Times in Pennsylvania published photos from Palm Beach and San Juan, while The Indiana Gazette printed a photo of the hurricane “in action,” and a map of the path of the Porto Rico-Florida storm. By September 19, stories were flooding the dailies, with first-hand accounts of heroism and narrow escapes. Surely, however, someone could have chosen a less-offensive headline than “Among the Missing” for a story that followed this last, which appeared in The Bee of Danville, Virginia. It was a joke about a missing husband used as filler and unrelated to the storm.

Search Newspapers.com for news of how hurricanes and other natural disasters may have affected your family and the communities in which they lived. And, please stay safe this hurricane season.