But One Life to Lose

“I only regret that I have but one life to lose for my country.” These are the immortal last words of Nathan Hale, who at 21 was hanged as a spy by British forces during the Revolutionary War. Hale was born on this day in 1755. 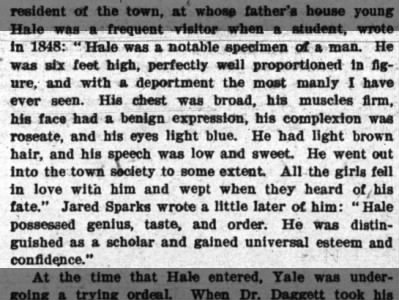 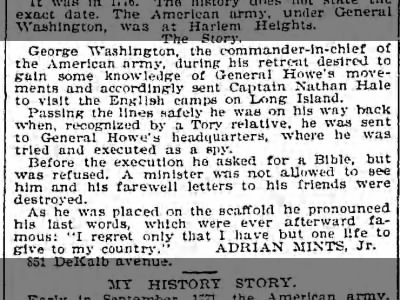 Though the article above mentions one of Hale’s loyalist relatives as the reason for his capture, there is another story that someone unrelated recognized Hale and tricked him into revealing himself by masquerading as a fellow patriot. There is also some speculation about the exact things he said before his death. The succinct phrase attributed to Hale is thought to be a summarized version of a longer quote he referred to in his final speech. Regardless, all contemporary accounts remember Hale’s final words as eloquent, and most include some version of the quote attributed to him today.

The Alice mentioned below is a sweetheart added to a 1901 play on Hale’s life and sacrifice. She may be invented, but the sentiment in the article is not: 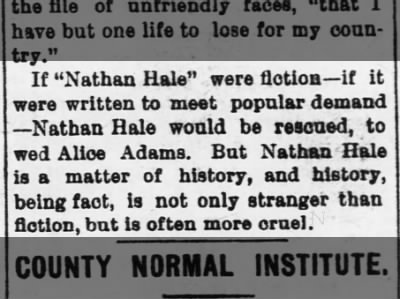 There’s much more in the newspapers about Nathan Hale, particularly around the turn of the century. Find those articles and more on Newspapers.com.