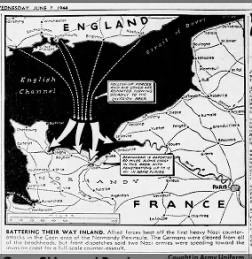 During the Normandy landings of D-Day during World War II, a force of Army Rangers scaled the sheer cliffs of Point-du-Hoc to the west of Omaha Beach and disabled the heavy German artillery there, making them the first American forces to accomplish their mission on D-Day.

In the lead up to D-Day, the Allies were aware of a group of 155mm German cannon positioned on a promontory called Point-du-Hoc, which was located between the planned landing sites of Omaha and Utah beaches. Although the guns could pose a threat to American troops landing on those two beaches, the main worry was the potential damage they could cause to the Allied transport ships offshore during the landings. 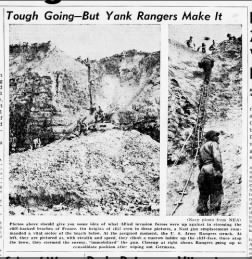 Companies D, E, and F of the 2nd Rangers were assigned to ascend the cliffs of Point-du-Hoc, while the remaining Rangers were given other objectives to help with the taking of the promontory. The Rangers faced difficulties the morning of D-Day before they even landed on the beach, which put them about 40 minutes behind schedule.

As Companies D, E, and F neared and then hit the beach, they had to face German fire from above, and the hail of bullets continued as the Rangers attempted with varying levels of success to deploy the equipment necessary to scale the cliffs, including rocket-propelled ropes with grapnels as well as ladders. Each group of Rangers used whatever methods they could to get to the top of the cliff, and once there, they faced the German defenders while trying to find the 155mm guns. 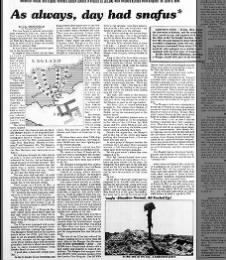 When the Rangers reached the emplacements where the big guns were supposed to be, they found that the guns had been moved and replaced with telegraph poles to fool Allied surveillance. So the Rangers moved on to their next objective of securing a nearby road to prevent German reinforcements from reaching Omaha Beach.

As they worked to achieve this, two groups of rangers discovered the missing guns about a mile from where they were supposed to be and disabled them. This meant the Rangers’ primary objective was achieved by 9 a.m., though their work was far from over, as they were forced to hold Pointe-du-hoc until June 8, when the relief column came to their aid.

Did any of your family members participate in the Normandy landings? Tell us about it! You also can find additional articles about Pointe-du-Hoc and D-Day on Newspapers.com.