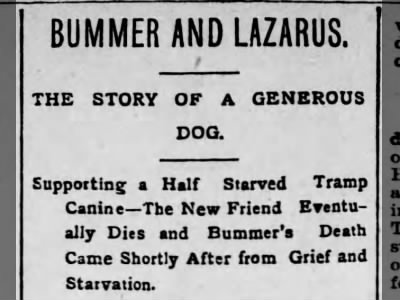 During the days when dogs outnumbered people in Los Angeles, fellow Californian city San Francisco became the playground for two homeless pups. Bummer and Lazarus were their names, and they escaped the too-frequent dog poisonings and bullets that killed so many of their canine companions by becoming San Francisco’s furry celebrities. The dogs’ excellent ratting skills and their comical friendship gained them city-wide notoriety and led them to be featured in newspaper stories for decades. 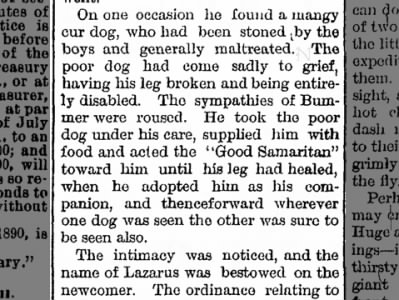 Bummer was a fluffy black dog, probably a Newfoundland or a Newfoundland mix. He was an impressive rat-killer and his usefulness in that area earned him a spot just outside of Frederick Martin’s saloon . As the story goes, Bummer rescued a smaller dog from a dog fight, nursing him back to health from a terrible leg injury. Witnesses to this dog-bonding did not expect the smaller dog to live, but Bummer was a loyal nurse. He brought his new companion food, encouraged him to eat, and slept next to him to keep him warm at night. The new dog was dubbed “Lazarus” after his miraculous recovery from the injury, and the city’s residents and reporters loved Bummer for his generosity. Lazarus, too, grew attached to Bummer and was a constant figure at his side.

Newspapermen and journalists hovered around the saloon, watching the dogs and creating dramatic stories about their lives and motivations. Bummer was purported to be the gentlemen between the two, a loyal and thoughtful friend. Lazarus, on the other hand, was seen as the fickle companion who only stayed around when it was convenient. The newspapers were strewn with personality-filled reports of the dogs’ adventures. 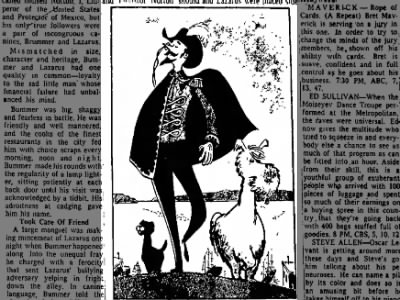 Many of the stories implied a connection between the dogs and Joshua Norton, an eccentric man who also lived in San Francisco. He claimed to be Emperor of the United States and Protector of Mexico, and the trio’s activities were well-documented in cartoons and articles from the 19th century. But the two dogs were never the pets of “Emperor Norton,” as he was known. In fact the Emperor was very offended by the cartoons, which he saw as a blow to his dignity. Emperors don’t traipse about with lowly dogs, you see. In reality, Emperor Norton and the two dogs were connected only in people’s imaginations. 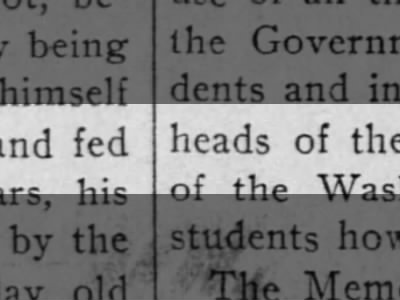 In October 1863, Lazarus died. While some papers chalked it up to old age, others claim he was poisoned. Either way, Bummer apparently became very downcast without his buddy and wandered aimlessly for two more years until he was kicked by a drunk. The effects of this kick were what finished him off, and in November 1865 he joined Lazarus “in dogland.” The man who had drunkenly and fatally kicked Bummer was arrested and fined, a mark of the people’s love for the dog.

To read more on Bummer and Lazarus, take a look at this search. You can find a lot more on the interesting Emperor Norton here. And be sure to check out all of the papers available on Newspapers.com for more stories like these.