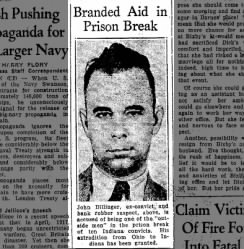 At the time of his death in 1934 at age 31, John Dillinger was America’s Public Enemy Number 1 and the most infamous bank robber of his era. America had been closely following his exploits for the last year as he robbed banks and escaped jails across the Midwest, leaving a trail of bodies in his wake. So when news broke of his death at the hands of federal agents, it made headlines nationwide for days.

Dillinger, born in Indiana, had first gone to prison in 1924 for the assault and robbery of an elderly grocer. He served 8 years of his sentence before being paroled in 1933 and had been out of jail less than a month before robbing his first bank. Dillinger committed more robberies before being caught and sent to jail in Lima, Ohio, in September 1933. However, with the aid of men he had previously helped escape from prison, Dillinger broke out of the Lima jail. 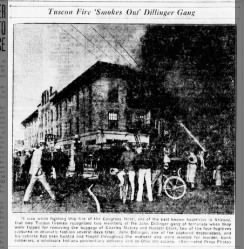 Dillinger and his gang resumed robbing banks until January 1934, when a fire at an Arizona hotel alerted the police to Dillinger’s location. Dillinger was taken to jail in Crown Point, Indiana, but he escaped two months later—this time using the sheriff’s own car as his getaway vehicle. After a brief visit to his family in early April, Dillinger, along with his gang, narrowly escaped capture in Wisconsin. Then in June, Dillinger was named Public Enemy Number 1 and a reward of $10,000 was offered for his capture (the equivalent of more than $175,000 today); Dillinger’s response was to rob a bank in Indiana.

In July, Dillinger stayed in the Chicago apartment of Romanian brothel madam Anna Sage, who, facing deportation, offered to help the FBI trap Dillinger in exchange for help with her immigration problems. Sage and Dillinger, along with Dillinger’s girlfriend, attended a movie on the night of July 22 while federal agents, alerted by Sage, waited for Dillinger outside. 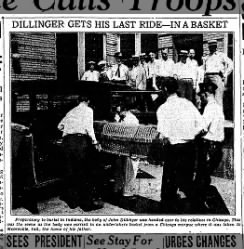 When Dillinger exited the theater, the agents ambushed him, shooting him to death. His body was taken to a hospital, where he was declared dead, then to the morgue, where thousands came to view his body. Dillinger was taken back to his hometown in Indiana for a funeral, after which he was buried in the family plot.

You can find additional articles about John Dillinger’s life of crime on Newspapers.com. Or use the search box to look for stories on other people and events that interest you.