The Ghost of Zona Heaster Shue 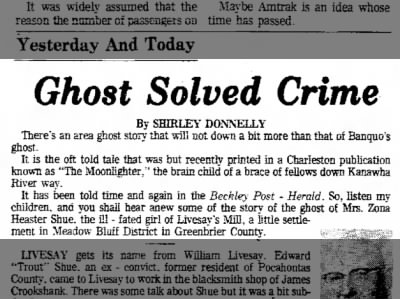 Once upon a time, a manly, talented blacksmith—Mr. Edward Shue—met a beautiful country girl—Ms. Zona Heaster. The two fell in love, and before long they found themselves at the altar of matrimony. A few weeks passed, and as far as anyone could tell the couple lived happy together. And were it not for the ominous image above and the rather tell-tale title of this post, you might think that’s where the story ends. But here’s where events take a morbid turn.

One day Shue sent a boy to his home to help his wife with chores. The poor boy arrived at the house only to find Mrs. Shue lying at the bottom of the stairs, laid out perfectly still as though sleeping. 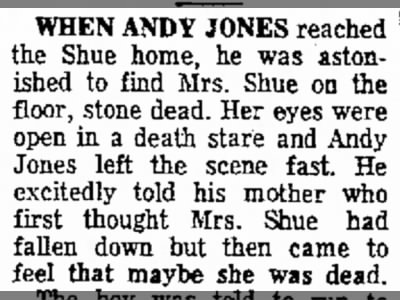 Of course, the woman wasn’t sleeping at all. A physician came to examine the body, but Shue became frantic with grief every time the doctor tried to examine the woman’s head and neck. The doctor gave up and declared that Mrs. Shue had died of heart failure. All through the funeral, Shue fussed with his late wife’s collar and how her head was placed, but everyone who noticed chalked up this odd behavior to the depths of his grief. Only Mrs. Shue’s mother, Mary Heaster, suspected her son-in-law of being false.

Mrs. Heaster, a very religious woman, spent many nights praying about her daughter’s fate. According to her testimony, it was during one of these nights of prayer that Zona Heaster Shue first appeared to her. 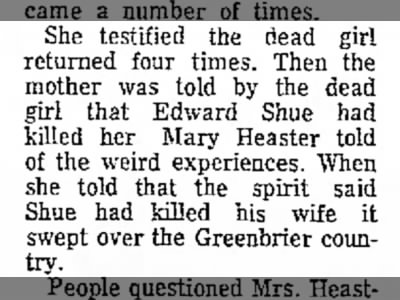 As the article above mentions, the dead woman’s ghost told her mother that she had been murdered by her husband. After this experience Mrs. Heaster demanded that her daughter’s body be exhumed and reexamined. Mr. Shue could do nothing to prevent a thorough examination this time, and it was found the the woman’s neck had been purposefully broken. Shue’s history didn’t help his case here, either: he had been married twice before and both of those wives had also died under suspicious circumstances. Shue was arrested for the murder of his wife, and after an hour’s deliberation the jury found him guilty. Shue died in prison eight years later.

2 thoughts on “The Ghost of Zona Heaster Shue”