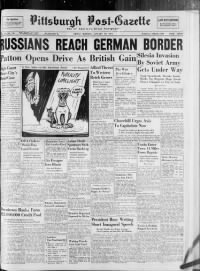 Pittsburgh has a long history of industry, especially steel, glass, petroleum, foods, and coke (a coal product), and men like Andrew Carnegie, Andrew W. Mellon, Charles M. Schwab, and Henry J. Heinz got rich there. However, being a center of industry also meant that Pittsburg was a hotbed of labor unrest, and you can find articles in the Pittsburgh Post-Gazette about the Great Railroad Strike of 1877, the Homestead Strike of 1892, the Pressed Steel Car Strike of 1909, and others.

You can, of course, also find items and anecdotes of local interest such as an article from 1900 about a zebra and lemur being born at the local zoo on the same day, or a short piece about the daughter of a Pittsburgh woman fleeing to Japan from China to escape the Boxer Rebellion. Or you can read about a stranger who returned a missing wallet with $1,600 still in it, or about a Halloween prank with unintended negative consequences. 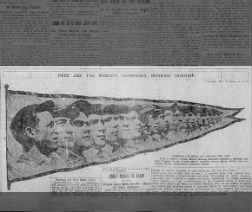 You can also read all about Pittsburgh sports teams, including an article from 1909 about the first time the Pirates won the World Series and an article from 1885 about a baseball game the author called “one of the best games of ball ever played in this city.”

So if you have Pittsburgh-area ancestors, or are just interested in Pittsburgh history, take a look at the Pittsburgh Post-Gazette!

25 thoughts on “The Pittsburgh Post-Gazette”