Who Was “Smart Alec”?

Turns out, the term “Smart Alec” almost certainly exists because of a real life man named Alec Hoag. He was a crafty criminal who was a little too clever for his own good. 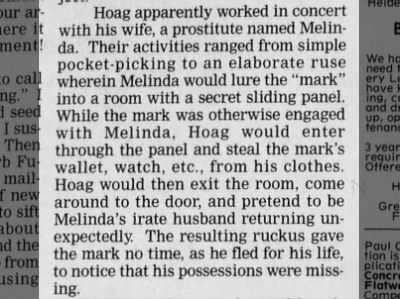 His usual method of thievery is described in the clipping above, but the “smart” part of Alec’s con was that he got the police in on it too, bribing them with shares of the stolen goods if they looked the other way. Of course, working out a way to cut the police out of their shares was probably not so smart, but that’s exactly what Alec did. The police eventually figured it out, and thus came the downfall of the original Smart Alec.