Do you have ancestors from Arizona? Or are you interested in Arizona history? Newspapers.com has added the Arizona Daily Star, with issues from 1879 to 2017.* 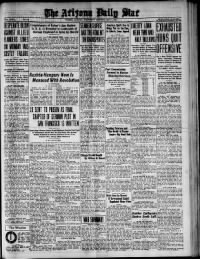 The Arizona Daily Star is a daily morning paper that began publishing in Tucson on January 12, 1879, more than 30 years before Arizona became a state. The paper was started as a complement to the already existing Arizona Weekly Star (which would publish until 1907). The Daily Star’s first editor was L.C. Hughes, who would later go on to become governor of the Arizona Territory. Though it was initially called the Arizona Star, within a matter of months the name was changed to the Arizona Daily Star, which it has kept ever since. Despite competition, the paper eventually grew to be a powerful force in Arizona politics and influential throughout the southwest.

Some items of interest from the Daily Star include:

If you have ancestors from southern Arizona or the Tucson area, you might just find them mentioned in the Daily Star. Likely places to find them include the personals column, society column, and local news briefs.
From these columns you can learn tidbits like “Miss Vida Cooper, daughter of Mrs. William F. Cooper, […] is spending the summer in San Francisco where she is continuing her vocal studies” and “Frank Tom Gibbings, graduate second lieutenant in the cavalry reserve has received promotion to grade first lieutenant.”

Get started searching or browsing the Arizona Daily Star on Newspapers.com!

With a Newspapers.com Basic subscription, you can view issues of the Daily Star from 1879 to 1922; or, with a Publisher Extra subscription, access those early years as well as issues between 1923 and 2017.