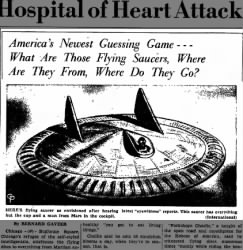 Headlines are designed to capture our attention, so when the subject of a headline also arouses our curiosity due to its outrageousness, we’re easily drawn into the story—exactly what the editors want!

A few of the wackier headlines and stories we’ve come across report on quirky news items and tales which often stretch the imagination. In 1947, “America’s Newest Guessing Game” was What Are Those Flying Saucers, Where Are They From, Where Do They Go? The accompanying article is quite fanciful and an image of the saucer in question is captioned as having everything but “the cup and a man from Mars in the cockpit.”

Flying machines, built right here on Earth, were close to becoming reality in the early 20th century. This imaginative contraption by William C. Horgan was invented to fly—although not very far—the year before Wilbur and Orville Wright’s historic and successful flight. Horgan apparently practiced along Chicago’s Garfield Boulevard at 4 o’clock every morning. He was ultimately caught and questioned by police and thus his invention became headline-worthy news. 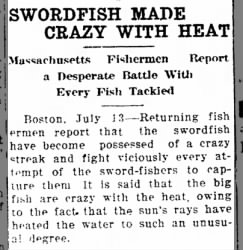 The summer of 1911 was so hot that New England fishermen reported that swordfish were made crazy by the heat. Other bizarre animal news featured a farmer who discovered a live scorpion in one of his sick cows after he was obliged to kill it and put it out of its misery. Sometimes the oddities are buried within otherwise innocuous news like a report of the delivery of a small alligator via parcel post, found in the Central Pennsylvania Fish and Game Conservation Association’s weekly “More Fish, More Game” column. Its name? Mrs. Al. E. Gator.

There are also sensational, ubiquitous tales of ape boys, weird werewolves, and Sasquatch sightings. And, every now and then the dead come back to life as one Chicago morgue keeper discovered in September 1885 when one of his “stiffs” woke up in the dead house. 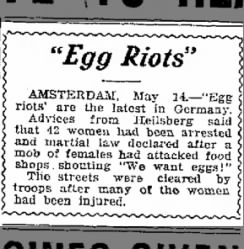 We could create delicious baked goods by combining ingredients featured in some headlines of the past. While the passage of time has dulled the tragedy of Boston’s famous molasses flood of 1919, it’s intriguing to imagine what it must have been like to watch a wall of molasses wash down city streets. Banana ink is one of the tropical fruit’s many uses in a 1912 article in the El Paso Herald, while egg riots in Germany led to the arrest of twelve women and a declaration of martial law in 1919.

At Newspapers.com you have a daily opportunity to uncover wacky headlines of your own and stories too bizarre to be true in thousands of historical newspapers online. We encourage you to clip them when you find them so others can enjoy the wackiness of it all.