On January 6, 1919, around four in the morning, Theodore Roosevelt quietly died in his sleep at home in New York after a battle with chronic illness that had rapidly worsened in the final months of his life. He was 60 years old.

Roosevelt’s funeral, held two days later, on January 8th, was a small, quiet affair. A short prayer service was held in the family home. Next came the funeral, which took place at a nearby church. Only 500 people were allowed to attend, and there was no music or eulogy. The mourners then followed the casket to the cemetery, where he was interred after the firing of three volleys and the playing of taps. His wife Edith attended neither the funeral nor the burial, instead mourning at home. Two of Roosevelt’s sons, Kermit and Ted, were also absent, as they were still serving overseas in the military. 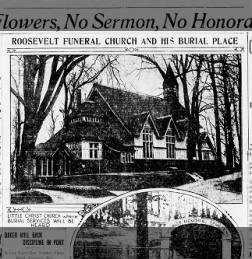 The nation was largely shocked by Roosevelt’s death. He had kept his illnesses quiet and displayed as charismatic and capable a public face as ever. Once the newspapers learned of his protracted illnesses prior to death, many of them attributed his declining health to grief over the death of his son Quentin, who had been killed during the war. Numerous editorials were published about his life and accomplishments, and though many acknowledged that Roosevelt had been a polarizing and controversial figure, nearly all commemorated him as a patriotic man, larger than life, who had—through skill and passion—achieved so much in so many arenas.

Though very few were allowed to attend his funeral, people honored the former president in other ways. President Wilson ordered the White House flag be flown at half-mast. Newspapers reported that stock exchanges would close and that Congress had adjourned early. The Boy Scouts planted trees in his honor, New York held a minute of silence, trains temporarily stopped running in Illinois as did streetcars in Chicago, some small businesses closed, and towns held their own memorial services. 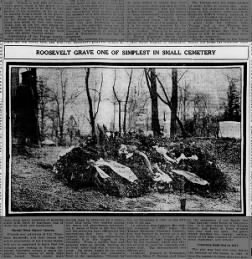 Though Roosevelt had as many enemies as he did friends, he had an undeniable impact on the nation, living life so energetically that few could keep up with him. Observed vice president Thomas Marshall, “Death had to take him sleeping, for if Roosevelt had been awake, there would’ve been a fight.”

Find many more articles about Theodore Roosevelt’s life and death on Newspapers.com. Or search for other topics that interest you.