Have you ever wondered, as you sort through your December mail, why we bother sending our friends and family cards for the holidays? Where did this tradition come from? Who began it all? 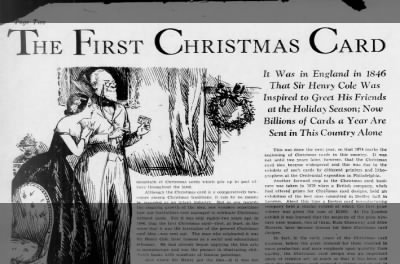 The idea for the first Christmas card is credited to Sir Henry Cole, who commissioned it in 1843. The card, illustrated by J. C. Horsley, was drawn in three panels: two showed the charitable work of feeding the hungry and clothing the poor, while the third showed a contented family raising their glasses to the card’s recipient, bidding them a Merry Christmas and a Happy New Year. 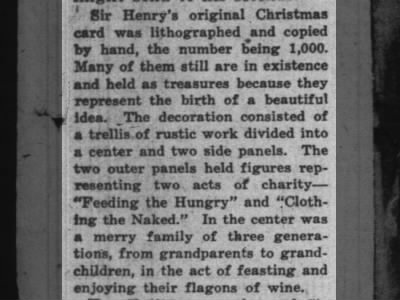 Cole had a thousand copies made available for purchase at a shilling each, and while the image of the alcohol-wielding family proved unpopular, the idea still managed to catch on. The practice of sending Christmas cards to family and friends has only grown since then, an increasingly profitable business for their manufacturers. Over the years a larger selection of cards have become available, allowing for more holidays, personality and design.

Only twelve of Cole’s original thousand still exist, one of which holds a Guinness World Record as the most expensive greeting card sold at auction after it was bought in 2001 for over $28,000.

Want to read more contemporary articles about Sir Henry Cole and his Christmas card endeavors? Try this search, or craft one of your own with Newspapers.com’s search function.