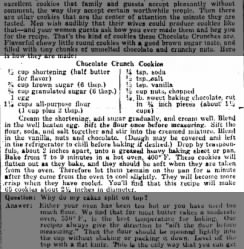 When Ruth Wakefield and her husband, Kenneth, started the Toll House restaurant in 1930 in Whitman, Massachusetts, they had no idea that their restaurant would become the birthplace of an American cultural icon: the chocolate chip cookie. The extremely popular Toll House restaurant was especially well-known for its desserts, one of the humbler of which was ice cream with a butterscotch nut cookie. Then sometime in the mid-1930s, Ruth Wakefield decided she wanted to try something a little different for that cookie—and what she came up with was the chocolate crunch cookie, the first chocolate chip cookie. 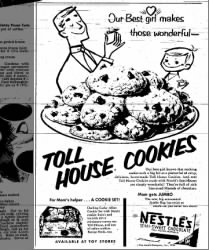 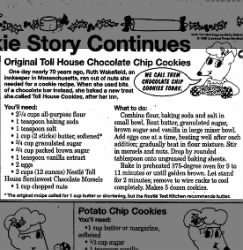 In the early 1940s, the recipe for Toll House cookies was printed and reprinted in newspapers nationwide. After some early changes to the recipe, it essentially remained unaltered from 1939 until 1979, when Nestlé’s original 40-year agreement ended. Nestlé has since made several minor changes to the recipe, the most obvious of which were increasing the cookie size from half a teaspoon to a tablespoon and decreasing the cooking time. The result was that the Toll House cookie went from a small, crunchy, brown cookie to the larger, chewy, golden version we’re familiar with today.

Newspapers.com is full of articles and recipes documenting the history of the Toll House cookie. Be sure to check out these clippings:

One thought on “The World’s First Chocolate Chip Cookie”