The Mother of Mother’s Day 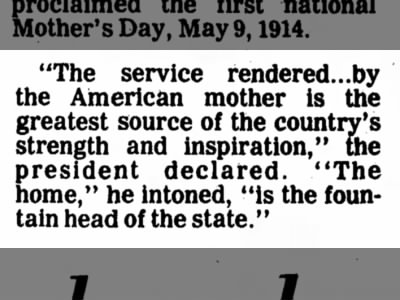 It’s always interesting to learn how holidays begin—how an ordinary day becomes a day of celebration, significant and different from the days around it. As you’ll have already guessed from the title of this post, Mother’s Day is one of many holidays that began this way. But this story ends with a sad twist for the very woman who is considered the founder of Mother’s Day in the U.S., Anna Jarvis. 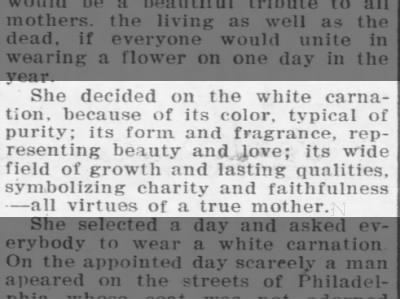 The first unofficial mother’s day was just a regular Sunday in 1908, three years after Anna Jarvis’s own mother’s death. Jarvis was a deeply devoted daughter who loved her mother dearly and decided to show gratitude and love for her mother with a memorial day. In her mind, Mother’s Day was a solemn occasion of simple gratitude, expressed through a heartfelt letter, a visit, or a gesture of appreciation. To represent the qualities of a mother, she chose a simple white carnation. 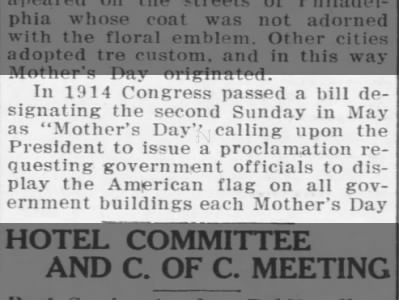 Only a couple of years later, Mother’s Day was celebrated throughout the state of West Virginia after the governor proclaimed it a statewide holiday. Jarvis kept up her efforts to spread Mother’s Day nationwide until finally, in 1914, President Wilson declared the second Sunday in May to be the official Mother’s Day in the United States.

And this is where the story takes an unexpected turn. The more popular the holiday became, the more Anna Jarvis began to resent what it was becoming. She fiercely protected the spelling of Mother’s Day, with its singular possessive, as a clear indication that it was meant as a day not for mothers generally, but for each person to celebrate their own specific mother. It is Anna Jarvis’s mother’s day, and it is your mother’s day, and that guy across the street reading the paper? It’s that guy’s mother’s day, too.

Card companies adopted the idea of Mother’s Day into their merchandise, creating trinkets and cards for people to give to their mothers. The cards were especially upsetting to Jarvis, who from the very beginning wanted Mother’s Day to be a day of devotion and sincere sentiment. The idea of giving mothers a card with someone else’s pre-written message inside, rather than sending a letter comprised of one’s own thoughts and feelings, was in complete opposition to the Mother’s Day she’d envisioned.

Jarvis spent the rest of her life and savings trying to bring Mother’s Day back under control, attempting to restore it to the respectful, intimate holiday she’d originally created. But all her boycotts and protests against those profiting off of Mother’s Day were ignored. 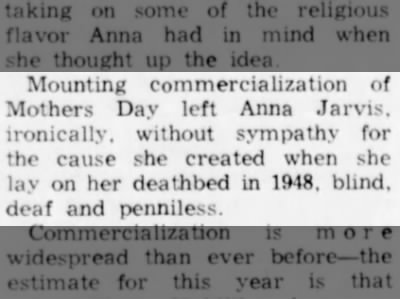 Today, Mother’s Day remains one of the most commercialized holidays in America. For card companies, this holiday is the third most lucrative each year, coming after only Christmas and Valentine’s Day. But this doesn’t mean that Mother’s Day need lose all that Jarvis tried to create. Because of her dedication to the celebration of her mother, millions of mothers are celebrated each year for their contribution to the lives and happiness of their children and countless others. This Mother’s Day can still be celebrated with a loving letter, a visit, or as a day of reflection for the mother you dearly miss. And if you bring your mum a box of chocolates, be sure to let her eat them all.

For more on Anna Jarvis and her involvement in Mother’s Day, you can click on any of the images above or search for Anna Jarvis on Newspapers.com. To see more general articles about the holiday, try this Mother’s Day search.

One thought on “The Mother of Mother’s Day”