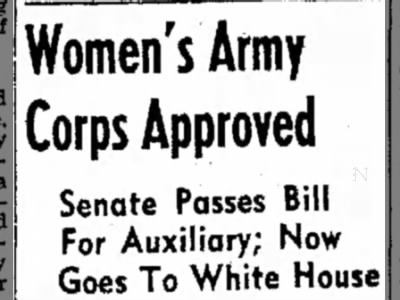 May 15 was an exciting day for the women who yearned to aid their husbands, sons, fathers and friends during the war-torn years of World War II. It was on this day in 1942 that the bill to create a women’s military corps was passed into law and the Women’s Army Auxiliary Corps was established.

Thousands of women enlisted after hearing the news, and within two months the corps was granted full status in the military. Its name was changed the Women’s Army Corps, with full military benefits granted to its members. Though the group was specifically used in noncombat roles, women in the WAC participated in every war theater across the globe as technicians, air-traffic controllers, electricians, clerks, radio operators, and in numerous other positions. 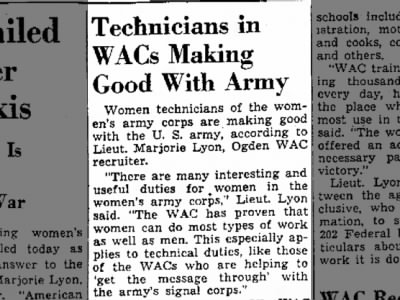 Opinions on the WAC were varied. Mostly, the public was none too happy about the development, as they believed that women did not belong in the war. The WAC was even advertised as a way to free the men for combat to help allay public outrage about allowing women in the military. Many in the army, too, felt threatened by the presence of these women who were taking over their roles. Others disagreed, however, finding the WAC to be vitally helpful. And there was no denying that the women of the WAC were well-disciplined, organized, and extremely useful. 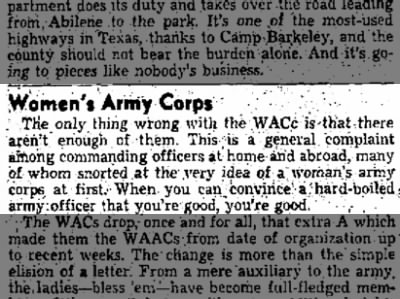 In the end, over 150,000 women served in this branch during the years before they were integrated with the rest of the military. During that time period, women served in their own corps in the other military branches as well.

For more on the early years of the Women’s Army Corps, try this search on Newspapers.com. You can also try a search of your own for more general information on World War II, women in the military, or anything else that strikes your fancy using Newspaper’s search page.