The Plague of Philadelphia

This week in 1793, Yellow Fever hit Philadelphia hard. Mortality rates hit their peak between October 10th and October 13th, contributing massively to the overall count of 4000+ people who died during the months that Yellow Fever ravaged the city. 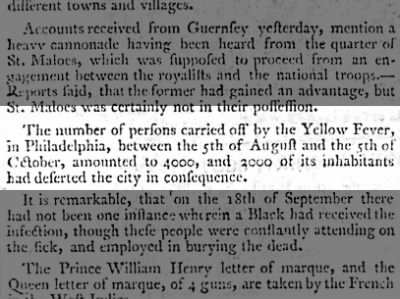 Perhaps you noticed the next paragraph in the clipping above. It’s true that people of color were commonly thought to have a sort of immunity to the fever, and were thus often asked to be nurses and caregivers to the sick. The truth is there was no actual immunity—unless one had previously had yellow fever—so the black population of Philadelphia was just as susceptible.

Surrounding cities and those along trade routes did their best to quarantine the fever before it spread. Some were unsuccessful, but many managed to avoid the epidemic. 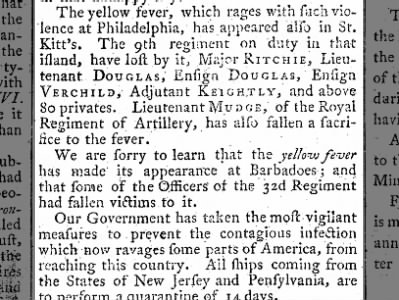 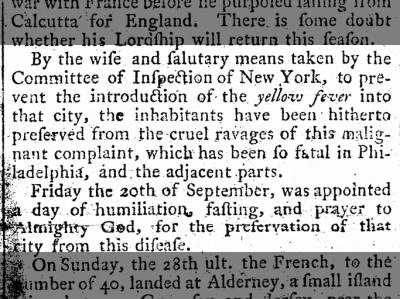 Dr. Benjamin Rush was an apprentice living in Philadelphia at the time and initially recognized the outbreak of the fever. He was a leading voice in treatment and prevention theories…not that his ideas were universally respected, then or now; in fact, the theories of Dr. Rush brought him a significant amount of ridicule. 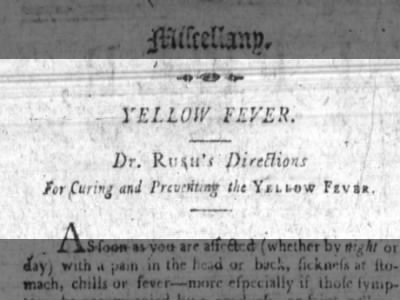 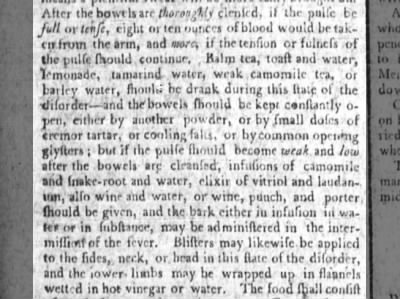 All attempts to clean the city and eradicate the fever were not exactly successful. Mosquitos were the true culprits, and they bred in the standing water that could be found in every street and alleyway. It wasn’t until temperatures cooled throughout the end of October and beginning of November that the epidemic was finally killed off. Those who’d fled the city returned, shops opened, families and friends mourned those they’d lost in those terrible months, and time pushed on.

Find more about the Yellow Fever with a search on Newspapers.com.