The Philadelphia Inquirer and Daily News 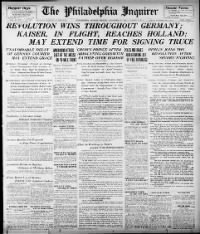 One of the oldest surviving papers in the United States, the Philadelphia Inquirer was founded as the Pennsylvania Inquirer in 1829 (Philadelphia would replace Pennsylvania in the title in 1859). It was originally a Democratic paper that supported President Jackson, but in its later history the paper would eventually lean Republican, then independent. As Philadelphia already had quite a few well-established papers when the Inquirer began publishing, the paper struggled at first, it but eventually found its footing and became a major paper in the city.

However, the paper really gained its reputation during the Civil War, when it became one of the best-regarded papers for accurate war news. Though the paper supported the Union, it was considered a more-or-less objective source, to the extent that even some Confederate generals, including Robert E. Lee, read the paper. The high quality of the Inquirer’s war news was the work of the paper’s nationally renowned war correspondents, including Uriah Hunt Painter and Edward Crapsey.

After the war, in what would become a cycle of declines and successes, the Inquirer hit a slump and its circulation dropped dramatically. The paper was revamped in 1889, including the introduction of a Sunday edition and an emphasis on classifieds, and the Inquirer once again became successful. However, under poor management, the paper hit another slump, particularly during the Great Depression.
.

In the mid-1930s, the Inquirer turned around once again. By 1947, the Inquirer was the only major morning paper in Philadelphia (though there was still a major evening paper in competition) and was turning a respectable profit. Yet another downturn followed, but beginning in the mid-1970s, the Inquirer began winning numerous journalism awards, including 20 Pulitzer Prizes to date, and regained its place as one of the nation’s most prominent papers.

Since the Philadelphia Inquirer focused on comprehensive news coverage for much of its history, the paper can be a particularly valuable source for learning about the events and issues prevalent in the city, state, and nation during your ancestors’ day. If you’re looking for specific mentions of an ancestor, you might find them in lists of death notices and marriage licenses, local social news, or even the day’s fire record or building permits issued, among many others.