The Near-Rescue of Floyd Collins

In February of 1925, a previously unheard name splashed across newspapers in the U.S. and beyond. Floyd Collins, an American cave explorer based in central Kentucky, had become trapped in an impossibly tight crawlway with arms tight at his sides and feet pinned by fallen rocks and debris. Rescue efforts captured the fascination of the country. Soon everyone knew the name and plight of Floyd Collins. 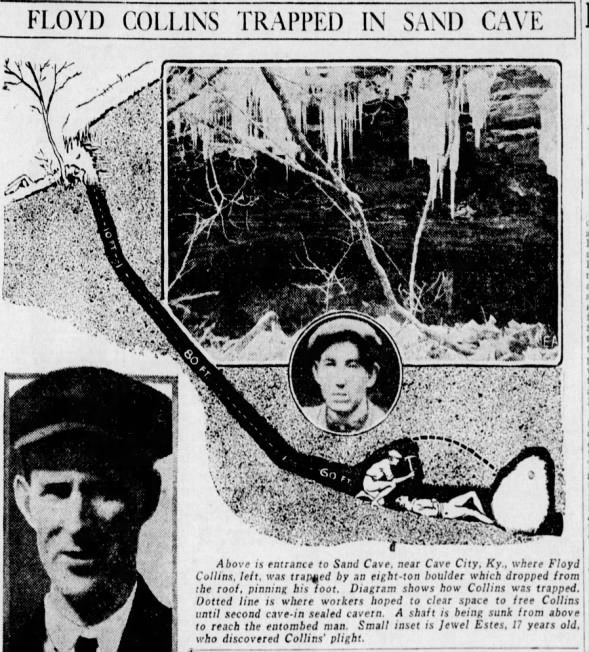 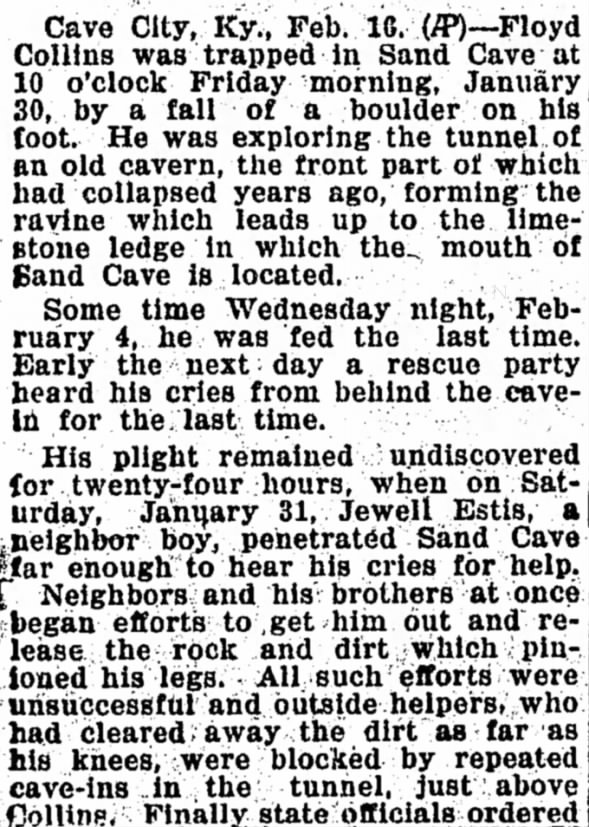 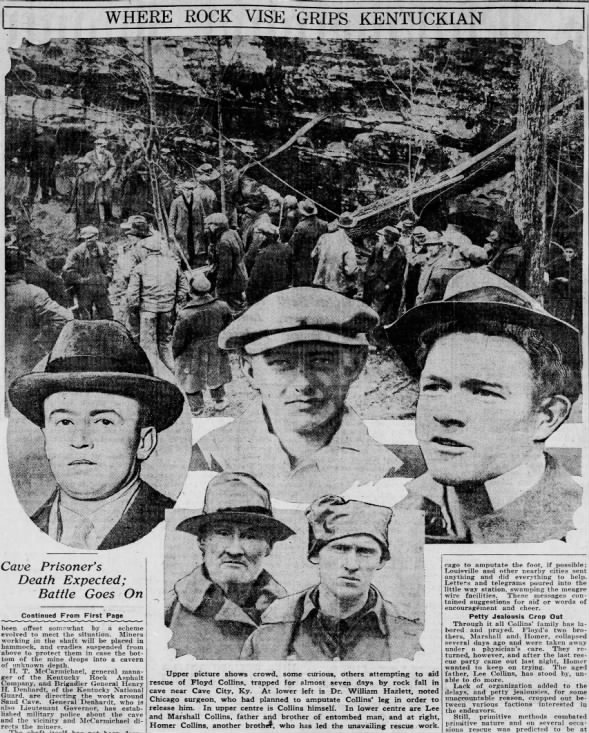 Early attempts to rescue Collins were small-scale but fervid. Collins’ friends and loved ones—those who could squeeze into the narrow cavern where he lay—made every effort to get him out. His brother Homer was the first man brave and lithe enough to reach Floyd. Johnnie Gerald, a caving friend, made a valiant effort with little success. A young reporter known as “Skeets” Miller also volunteered, and it was his involvement and subsequent reporting that made Floyd Collins a household name. 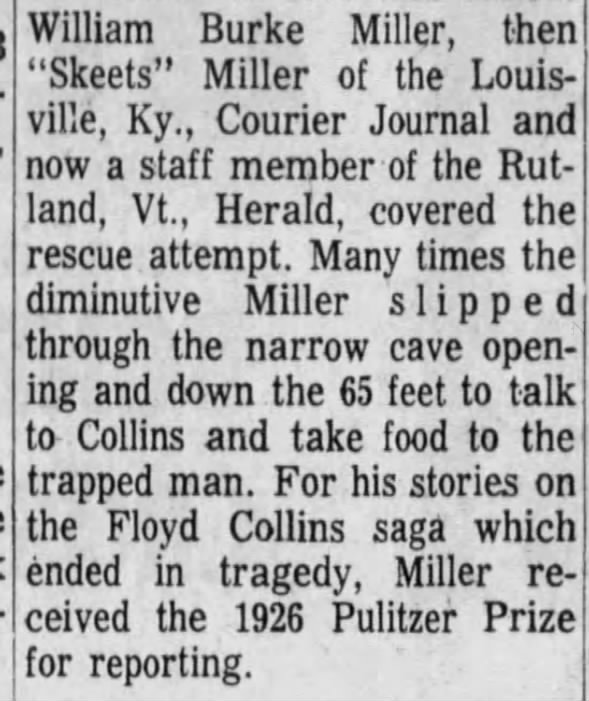 They tried digging. They tried pry bars. At one point a rope was suggested, though everyone involved was pretty sure it would leave Collins without his foot. Unfortunately the angle of the tunnel was just too sharp and the process too painful. The rope idea was abandoned, and Collins remained trapped. 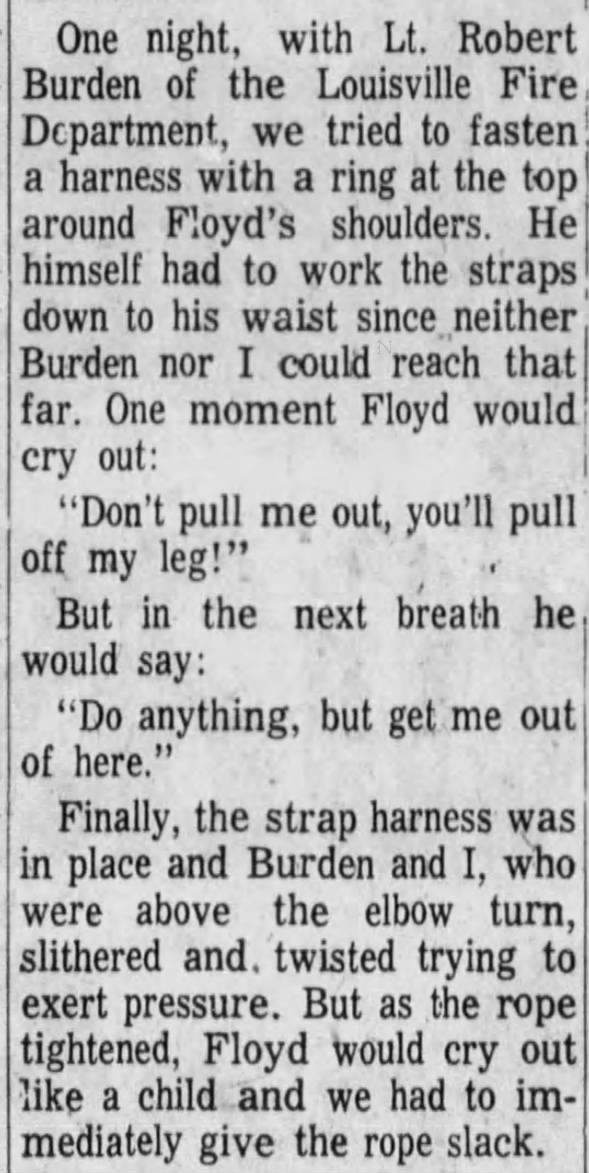 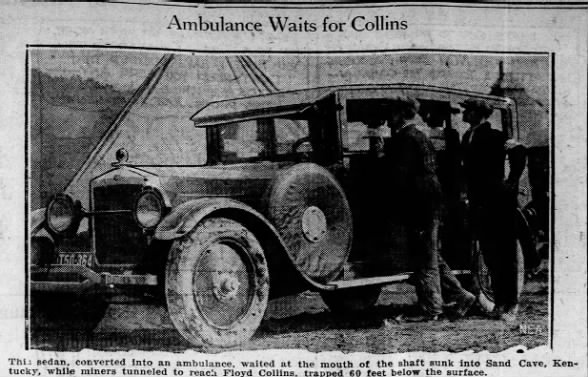 Hoaxes abounded from people trying to make a buck off a popular news story. Claims were made that Collins wasn’t trapped at all, and in some cases, men stepped forward to say that they were Collins. But the real Collins was very much stuck inside that cave, and after the tunnel used to reach him collapsed he was left alone without food or water. Only a lone light bulb remained with Collins to lend him meager warmth and even worse company.

A new plan was made. Since Collins couldn’t be reached through the cave tunnels, a shaft would be dug straight from the surface down to Collins. Unfortunately, progress was excruciatingly slow. A process rescuers intended to finish in a handful of days took almost two weeks, and hope began to dim. So too did the light bulb, which blinked out at some point on February 11th. But the shaft was nearly finished, and those digging knew that Collins would be found soon, one way or another. 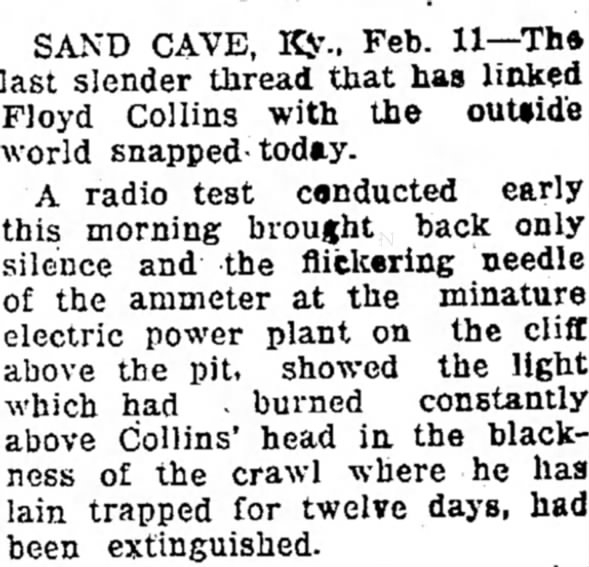 After weeks of concerted effort, national attention, and long-strained hope, rescue teams found Collins’ body. It was estimated that he had died two or three days before the shaft finally broke through to the cavern that trapped him…less than a day after his light bulb had gone out. It was a tragic, sobering end to the story, but not wholly unexpected. What man could survive the February cold with no food or water for seventeen days? Just like that, a nation that had hoped together became a nation that mourned. 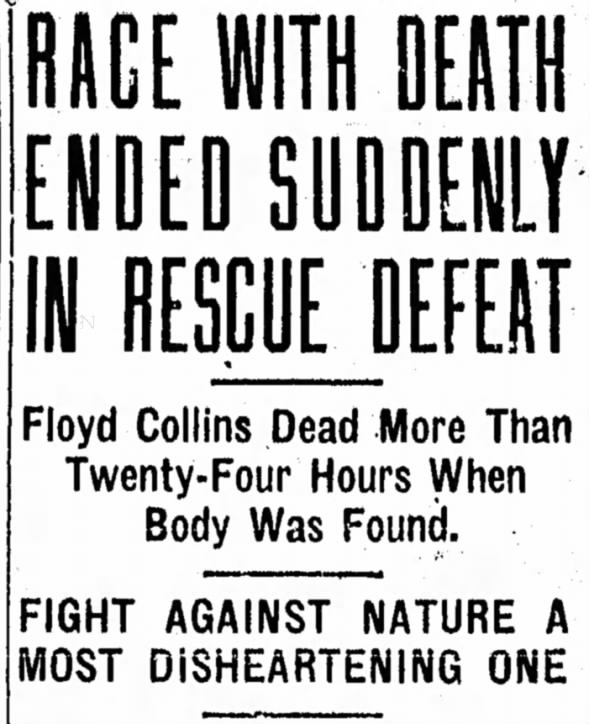 There are hundreds of articles about Floyd Collins. Try a search to find more about Collins before the incident, the sensationalized reporting of his entrapment, and the stories of those who helped him on Newspapers.com.

One thought on “The Near-Rescue of Floyd Collins”