A group of young men volunteered to eat poison for dinner. All in the name of science.

The press dubbed them the Poison Squad, but the man in charge—Dr. Harvey Wiley—called the experiment the “hygienic table trials.” The trials, which lasted from 1902 to 1907, were part of Wiley’s crusade to prove that common chemical preservatives then in use were not fit for human consumption.

More than 100 years later, the preservatives in our food are once again a hot topic. Many food packages now declare they are preservative-free to boost sales, and an internet search for the question “Are food preservatives bad for you?” returns more than 2.5 million results.

Is there anything we can learn from Harvey Wiley and the Poison Squad?

Dr. Wiley’s Crusade
At the time of the table trials, Wiley was chief chemist at the U.S. Department of Agriculture. One of his passions was pushing for federal regulation of food “adulteration”—in other words, he wanted to stop food manufacturers from adding potentially dangerous substances to food and misleading consumers about ingredients. 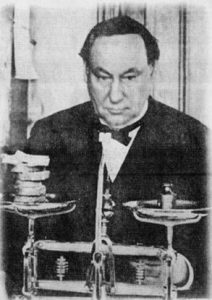 In 1902, Wiley received money from Congress to study the effects of chemical food preservatives on humans. For the next five years, Wiley conducted experiments in which he fed groups of young men common food preservatives of the day—like borax, salicylic acid, copper sulfate, and formaldehyde.

Fully informed of what they were getting into, the volunteers received three square meals a day—in exchange for eating doses of the preservatives along with their meals. Throughout the experiment, their vital signs were recorded, and urine and stool samples were collected and analyzed.

Careful notes were taken about any symptoms the men developed. Borax, for instance, was found to cause headaches and stomach aches, while the formaldehyde test had to be ended early because the men got too sick.

The Public Joins the Cause
The press eventually caught wind of these experiments, and the so-called Poison Squad became a national sensation. Article after article appeared in newspapers around the country, generally praising the efforts of Dr. Wiley and his volunteers. “The food consumers of America owe a debt of gratitude to Dr. Wiley’s ‘poison squad,’” read one such article in the Salt Lake Telegram in 1903. “Congress should give every one of them a gold medal.”

Ad for Ceylon and India Tea (from the New York Tribune)

The high visibility of Dr. Wiley’s preservative experiment increased public awareness of food safety, an issue that women’s groups had long been championing. Because of this growing awareness, some food and beverage companies began advertising their products as being free of risky substances. A 1902 ad for Ceylon and India tea, for instance, boasted the product was “not mixed with adulterants or coloring matter”—a shift from just two years prior, when that product’s ad made no reference to food safety.

Although Dr. Wiley’s methods seem somewhat suspect today, his experiments paid off. His findings from the Poison Squad ultimately enabled him to work alongside other activists to push through the 1906 Pure Food and Drug Act—the nation’s first real federal food regulation law.

The Debate Lives On
Today’s debate about food preservatives revolves around some of the same issues as in Dr. Wiley’s day. One side emphasizes preservatives’ role in prolonging the shelf life of food and making it cheaper and more accessible, while the other criticizes chemical preservatives for their potential dangers. It’s a complicated issue.

But if there is one thing either side can learn from Dr. Wiley’s story, it’s the power that passionate and persistent individuals have to shape the national conversation on food safety. Just without a Poison Squad this time.