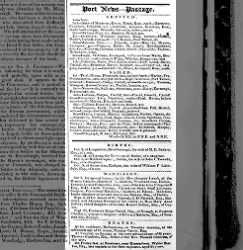 Newspapers.com recently added a new country to the list of where our papers are published: Ireland. A few cities covered include Carlow, Dublin, Kilkenny, and Waterford, with Dublin offering the most titles. At this time, publication years range from the late 18th to the late 19th century, and over fifteen new titles are featured.

Most of the papers, like many in their day, have advertisements concentrated on the front page and are brimming with local news items on the inside. The papers also regularly update their readers with news from around the world. The Irish perspectives can sometimes appear different to an American reader. If you’re interested in “Catholicity in New York” in 1853, The Waterford News offers a correspondent’s exposé that also includes updates for churches in St. Louis, Cincinnati, New Orleans, and San Francisco. 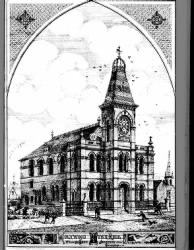 The Irish Times, published in Dublin, has a long legacy of reporting quality news. In this 11 February 1886 edition, many of the articles report on a Great Panic in London where rioters forced shops to close and general mayhem ensued. On the other end of the publishing spectrum, The Dublin Builder is a specialty title, later known as The Irish Builder. It often featured construction designs and sketches of buildings, as it reported on “architectural, archaeological, engineering, sanitary, arts and handicrafts.”

Waterford is a vital port city so news of ships arriving and sailing are regular features in every issue. That last clipping is shared with other important news pertaining to its citizens: births, marriages, and deaths. Likewise, The Freeman’s Journal in Dublin prints the vital news of its citizens in most issues. If you had an ancestor living among the gentlemen, clergy, freemen, and freeholders of Dublin in 1785, you may find his name on a long list (upwards of 600) signing this address to the King. 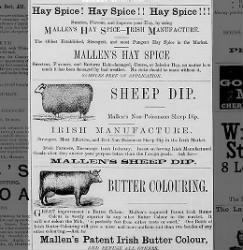 Carlow, located midway between Dublin and Waterford, is the county town of County Carlow. It has a rich agricultural history so the front-page ads revolve around items like hay spice, sheep dip, and butter colouring. Like the other papers, the inside pages include death notices, help wanted ads like this one seeking a midwife at £25 per annum, and signs of hard times like Dr. O’Neill’s report of overcrowding in the poorhouse.

These newspapers from another era and another country are brimming with insights on different cultures, customs, and perspectives of the world. Enjoy browsing Newspapers.com‘s new collection of issues of newspapers in Ireland and keep watching for future editions coming soon.