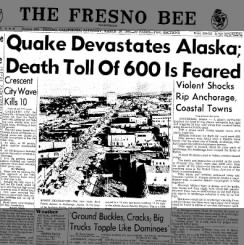 The second strongest earthquake ever recorded rumbled out of Prince William Sound in Alaska fifty years ago this month, on March 27, 1964. Anchorage, 75 miles northwest of the epicenter, was hardest hit by the quake which at its peak measured 9.2 on the Richter scale. Tremors and tidal waves reverberated down the west coast of Canada and the United States. Smaller tidal waves were noticed as far away as Hawaii and Japan, but the most severe damage occurred in Crescent City, California, where 12 people were killed.

Known as the Good Friday Earthquake, the day on which it occurred, it lasted 3-4 minutes. Aftershocks reached into the thousands over the next three weeks and did not entirely stop for a year afterward. Several articles on the front page of the Fairbanks Daily News-Miner two weeks later on April 16, report on continued damage in flooded communities, uprooted glaciers on Mt. McKinley, and more quakes in Fairbanks and Anchorage. Children told of their experiences during the “earth quick” alongside an article about Anchorage’s $50-million plan to rebuild. 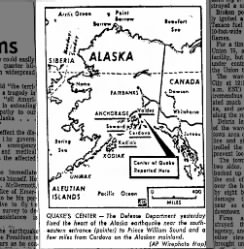 Newspapers in the Lower 48 were quick to speculate on death tolls and many hundreds were feared dead. While the physical devastation was enormous, the loss of life was comparatively small—115 in Alaska plus 16 tidal wave-related deaths in Oregon and California—because of the state’s low population density. No lives were lost in British Columbia, but Canadians organized disaster relief for those who lost property. Maps of the disaster were printed in this Indiana newspaper, and the Santa Cruz Sentinel published a page of disaster photos.

When the earth and ocean get shaken as they did in Alaska’s Good Friday Earthquake, you can count on finding news headlines around the country and around the world. You can find more historical accounts of the 1964 earthquake on Newspapers.com.