At times the 8-hour workday feels unbearably long, doesn’t it? And yet it’s nothing compared to what many workers endured in the seventeenth century. It was not unusual for employees to be stuck at work-intensive jobs for 10-16 hours a day, and by 1884 America’s labor force had had enough. 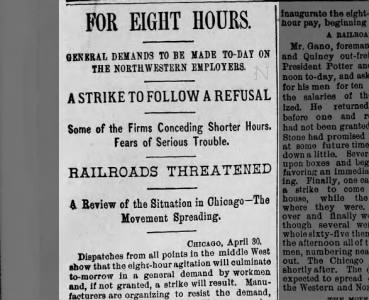 In October 1884, a Federation of Organized Trades and Labor Unions convention came to the unanimous decision that an 8-hour workday should become standard on May 1, 1886. When that day came, thousands of workers went on strike to support the effort. Chicago led the movement, with over 30,000 strikers and perhaps twice as many general supporters flooding the streets to aid in the protest.

For several days the strikers surprised the populace with their peaceful marches and demonstrations. But on May 3, 1886, there was an incident at the McCormick Harvesting Machine Company in Chicago. Despite strike leader August Spies’ pleas for calm, strikers surged toward the building to confront strikebreakers. Police fired into the crowd, killing two. 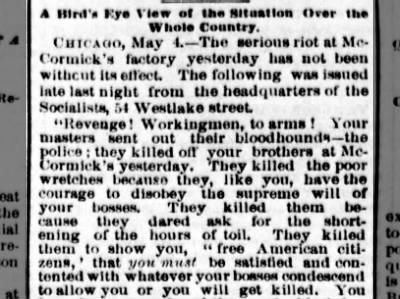 The next day saw a rally at Haymarket square to protest the police violence. Movement leaders Spies, Albert Parsons, and Samuel Fielden spoke to the gathered crowd (on the condition that the violent speech be removed from the “Revenge!” fliers like the one described above) and for a while all remained peaceful. But then a police force arrived and ordered the rally to disperse. A lone protester lobbed a homemade bomb at them, killing one officer instantly and mortally wounding six more.

Public opinion turned against the 8-hour movement and the connected protesters, and a wave of arrests were made. Among the arrested were rally speakers Spies, Fielden, and Parsons. Five others who had not been at the rally were also arrested and included in the remarkably unjust trial that followed: Adolph Fischer, George Engel, Michael Schwab, Louis Lingg and Oscar Neebe. 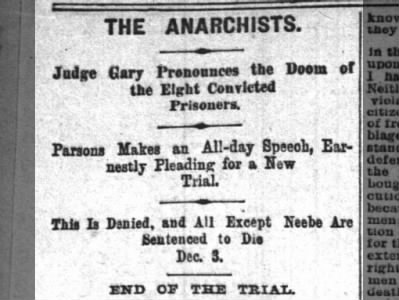 All were sentence to death but Neebe, whose punishment was 15 years in prison. Schwab and Fielden appealed for a life sentence instead, which they were granted. Lingg killed himself the night before the execution, taking his fate into his own hands. The remaining four were hanged. They became international martyrs for the cause, and many prominent people spoke out openly and angrily against the conditions of the trial and sentencing.

The whole Haymarket debacle was a hitch in the American labor movement’s progress, but it did strengthen the resolve to continue fighting for the 8-hour day. An international celebration was created, to be observed every May Day as a commemorative event for those who died and were executed during those May 1886 strikes. 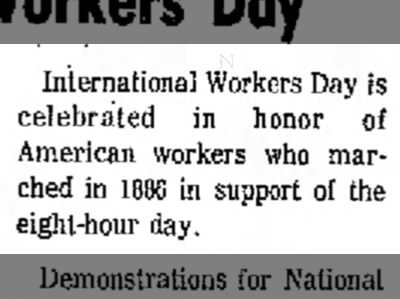 This International Workers Day is still an official holiday in many countries around the world, though it is rarely thought of anymore in the United States.

If you’re interested in learning more, search Newpapers.com for contemporary articles about the riots, strikes, and the “anarchist trial.” There’s a lot to be found on this topic and many others, and the browse page is great for stumbling upon history’s random tidbits.