Lindbergh Completes His Transatlantic Flight: May 21, 1927 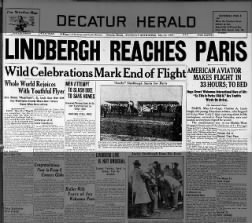 On May 21, 1927, at 10:22 p.m. local time, 25-year-old Charles Lindbergh and his silver monoplane, the Spirit of St. Louis, landed in Paris, France, making him the first aviator to successfully fly nonstop across the Atlantic from New York to Paris.

A former barnstormer, Army Air Service cadet, and airmail pilot, Lindbergh decided to try to win the Orteig Prize—$25,000 to the first aviator to fly nonstop from New York to Paris or vice versa. Many well-known pilots of the day had attempted the flight, but all previous attempts had ended in accident or death.

Lindbergh, a virtually unknown pilot at the time, had a hard time finding a company to sell him a plane in which to make the journey, even after he found backers in St. Louis to fund him. Eventually, he found Ryan Airlines, based out of San Diego, which would custom-build him a plane to his exact specifications—a light-weight, one-seat, single-engine monoplane with only the bare essentials to allow for extra fuel. 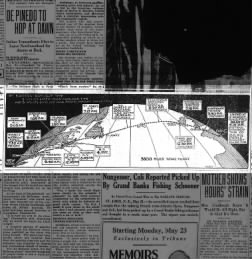 The plane, named the Spirit of St. Louis, was completed in a mere 60 days, and after stopping in St. Louis, Lindbergh flew on to New York to make his attempt. Initially, the flight was postponed due to poor weather, but as soon as it began to clear up, Lindbergh departed on May 20 at 7:52 a.m. The trip took him 33 ½ hours, and though he faced challenges like ice building up on his plane, Lindbergh’s greatest struggle was staying awake and alert over the long flight.

From the moment he touched down, Lindberg became an instant celebrity. Tens of thousands (and perhaps upwards of 100,000) French greeted him at the airport, and an estimated 4 million people packed the streets during his parade in New York City. 30 million Americans (about a quarter of the population at the time) came to see him as he toured the Spirit of St. Louis around the country in the months that followed. He even received the Medal of Honor for his landmark flight. 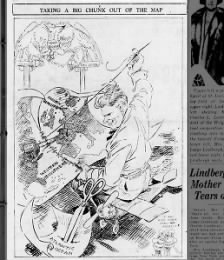 Lindbergh used his immense fame to promote the nascent aviation industry, and though he would lose favor in later years because of his controversial political and personal views, for a time he was easily one of the most famous people in the world.

Did any of your family members see Lindbergh as he toured the nation? Tell us about it! If you want to learn more about him, you can search for articles on Newspapers.com.

12 thoughts on “Lindbergh Completes His Transatlantic Flight: May 21, 1927”