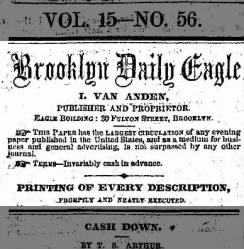 Started in 1841 as a temporary political paper, the Eagle soon evolved to focus on Brooklyn in general. One of its early editors was none other than poet Walt Whitman. During his time at the Eagle, Whitman wrote on a variety of subjects for the paper, including the lack of public parks in Brooklyn, state election results, the slave trade, and the Mexican-American War. 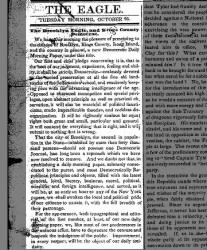 As Brooklyn grew, so did the Eagle, and by 1856 it claimed to have the “largest circulation of any evening paper published in the United States.” The paper didn’t shy away from taking stances on the issues affecting Brooklyn, championing the building of the Brooklyn Bridge and opposing Brooklyn’s consolidation into the City of New York in 1898.

But the paper covered more than political issues, and beyond birth, marriage, and death announcements, you might find your Brooklyn ancestors in its gossip columns or reports on local club, society, and committee meetings (some with lists of people in attendance). Or look for your ancestors in the paper’s unclaimed letters lists or “About Brooklyn People” section. If you’re a sports fan, you can track the history of the Brooklyn Dodgers from their first home game on May 12, 1883, to their signing of Jackie Robinson and his opening game on April 15, 1947. 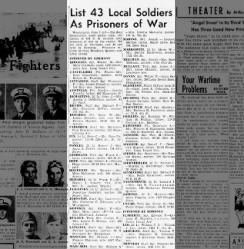 As the United States got increasingly involved in World War II, so did the Brooklyn Daily Eagle, and within its pages you can find not only stories about the big battles, but also stories about Brooklyn soldiers off fighting the war, as well as lists of casualties and of local boys taken prisoner of war.

The Brooklyn Daily Eagle was published up until January 28, 1955, when a 5-month-long strike by the Newspaper Guild for higher wages forced it to stop its presses. Over the course of its 114-year publication, the Eagle saw Brooklyn’s population grow from 47,000 to 2,700,000, and you can find the day-to-day history of that growth—and accounts of those inhabitants—in the Eagle’s pages on Newspapers.com.