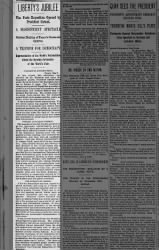 “It was a spectacle worth remembering,” reported The Times of Philadelphia on the opening of the 1889 Paris World’s Fair. Called the Exposition Universelle by the French, the fair opened May 6 to much anticipation. After all, the world had just spent more than two years following the construction of the Eiffel Tower (the tallest man-made structure at the time) and was curious to see what else the 228-acre fair would have to offer.

The French Republic had proudly declared that the fair would celebrate the centennial of the French Revolution, and as a result many monarchies in Europe declined to send official diplomatic representatives. Nevertheless, those countries—as well as the United States and countries from Latin America, Asia, Africa and elsewhere—had exhibits displaying the technical and cultural marvels from their respective countries. Not only could visitors see Thomas Edison’s miraculous phonographs, for instance, but they could also visit the “gigantic” porridge tureen of the king of the Sandwich Islands 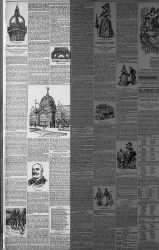 From May through October, the duration of the fair, newspapers were full of accounts of the exposition’s many wonders and attractions. Articles described with amazement the countless exhibits, and reporters wrote home to their newspapers about the theaters that displayed “curious national dances” and about the enormous Palais des Machines, which exhibited recent inventions. Readers also learned how attendees could visit replica villages of France’s many overseas colonies, observing the inhabitants and sampling cuisine. On top of that, papers described America’s own Buffalo Bill and his Wild West Show, which performed at the fair and headlined famed sharpshooter Annie Oakley. And all that was just the beginning of the coverage on the multitudes of curiosities the exposition had to offer.

While hometown papers reported excitedly on locals returning from the fair and featured travel ads and ticket giveaways for those still eager to make the trip, not everyone was entirely enamored of the exposition. Some dissatisfied reporters satirized the experience, and others expressed disappointment in various exhibits. Still, by the end of the fair in October, an estimated 28 million people from across the globe had attended what one article termed “the most elaborate and magnificent exhibition ever held.”

Discover more about the 1889 Paris World’s Fair—or learn what your own ancestors were doing that year—on Newspapers.com.