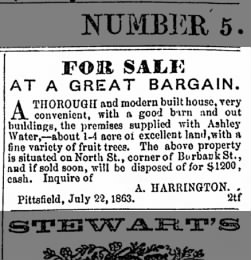 When we think of the Civil War, our minds often turn first to the battlefield; yet despite the millions of men who fought in the war, the majority of America’s 31 million people lived out the war in their own homes, whether that was on a farm, in a small town, or in a big city. When discussing such a large number or people, it’s impossible to say there was any one type of “typical” home front Civil War experience, since so many variables were at play, including where a person lived, their race, their gender, their economic circumstances, and numerous other factors.

But one way we can get an idea of what life was like for everyday individuals living on the home front during the Civil War is through newspapers. Not only can articles and anecdotes help flesh out our understanding, but newspaper ads and notices are a particularly valuable way to fill in the blanks about the lives of “ordinary folks” at the time.

Some ads—like those for patent medicines and grocery stores—seemed to be prevalent across the country, while others—like offers of rewards for runaway slaves—were more typical of specific regions. And while some ads reflected the realities of wartime, others show that in some ways, life—and the goods and services needed—remained the same even when the country was at war.

Below is a selection of ads and notices from newspapers across the country during the Civil War. Take a look and learn a little more about what life may have been like for your ancestors:

These clippings are just the beginning! Find countless more by browsing Newspapers.com. You can find out about other eras your ancestors lived in by looking for ads from those time periods as well. You could also focus on ads from a specific state or town.