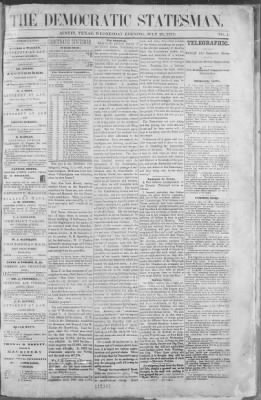 Austin has long been a cultural, educational, and political hub, and this focus has been reflected in the American-Statesman’s content over the years. The paper has also traditionally had strong local and regional coverage, making it a valuable resource for learning about interesting and important events in Austin’s past. For example, you can read about the unsolved serial murders committed between 1884 and 1885 by a perpetrator dubbed the “Servant Girl Annihilator.” Or read about a dam collapse in 1900 that resulted in the deaths of 18 people.

The American-Statesman’s strong local coverage also makes it a great resource for genealogical research. Read about your ancestors’ births, marriages, and deaths, as well as stories from their daily lives, such as this piece from an 1883 issue about a local boy who narrowly avoided being killed by runaway horses.

Get started searching or browsing the Austin American-Statesman on Newspapers.com! With a Basic subscription, you can access issues up through 1922; or with Publisher Extra, access those early years plus issues from 1923 and beyond.