3 Vanishing Halloween Traditions from America’s Past

Love spells on Halloween? This was just one way some Americans celebrated October 31 in times past. Want to learn more? We used the historical papers on Newspapers.com™ to learn about three Halloween traditions that used to be common in the United States but are less so now! Were any of them around when you were a kid? 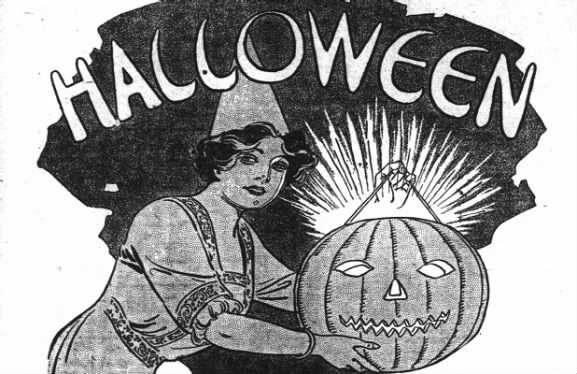 “Hurrah for treats of Hallowe’en, Doughnuts and cider sweet,” exclaimed a children’s poem published in newspapers in 1919. For many decades, no Halloween party was complete without doughnuts, especially paired with cider.

The close association of doughnuts and cider with Halloween was captured in an article from 1922 Vermont that noted, “There are certain goodies associated with Hallowe’en, just as turkey is bound up with Thanksgiving. Cider, doughnuts, pumpkin pies, nuts, and apples!” What kind of doughnuts? The article specifies, “We do not mean doughnuts made from a yeast dough, but the rich cake-like doughnuts.” 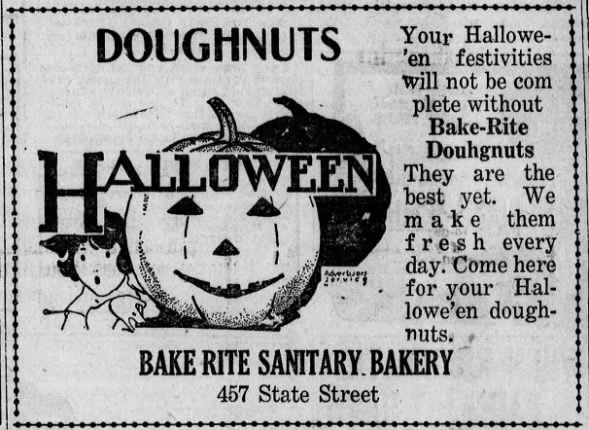 Divination “games” were another American Halloween tradition, though many of them originated in the British Isles before making their way across the Atlantic.

Games that “foretold” a person’s love life were especially popular on Halloween. Apples were used in a number of them, and one featuring apple peels was often mentioned in newspapers over the decades. For this love “spell,” a person pared an apple peel in one long strand, spun it around their head three times, and then dropped it over their shoulder. (In some versions, they also recited a rhyme). The fallen apple peel would supposedly form the initial of the person’s future spouse!

Another Halloween divination involved baking a cake that had various “charms” mixed into it, like a ring, coin, and button. The charm that a person found in their slice of cake was supposed to indicate their future: the ring meant a happy marriage, the coin meant riches, the button meant a hard life, and so on. Some newspapers even printed recipes for these Halloween charm cakes! 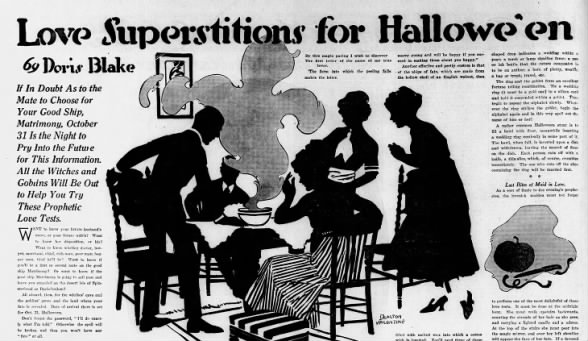 While pranks and vandalism are still a part of Halloween in some parts of the U.S., they used to be much more common and even expected. Every year, newspapers would print warnings from local officials cautioning children not to get into trouble on Halloween. And every year, after the holiday, newspapers would report on the pranks and vandalism (sometimes quite serious) that kids had gotten up to anyway.

Soaping windows seemed to be perennially popular with kids on Halloween night. An article from 1926 Indiana reported that “Automobile windows, shop windows, house windows—all glass within reach was generously soaped, or more annoyingly yet, waxed.” And one from 1929 confirmed that soaping windows “seems to be part of the Halloween ritual.”

One interesting article from 1922 Kansas interviewed local adults about the Halloween mischief they had gotten up to as kids. Their pranks ranged from hanging wagons from trees and dragging farm equipment into the middle of the road, to tearing down fences and putting a teacher’s cow on the roof!

There were far more Halloween traditions in America’s past than just these three. People also celebrated by building bonfires, bobbing for apples, playing snap-apple and snap-dragon, hosting oyster suppers, and attending costume parades—just to name a few!

What Halloween traditions did you grow up with? Let us know in the comments!

2 thoughts on “3 Vanishing Halloween Traditions from America’s Past”