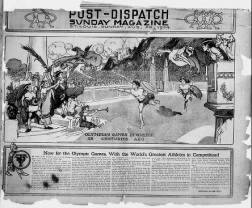 In the summer of 1904, St. Louis, Missouri, hosted the Olympics—the third Olympics of the modern era and the first to be held in an American city. The games were held July 1 to November 23, with the main focus on events between August 29 and September 3.

The St. Louis Olympics were held in conjunction with (and took a backseat to) the St. Louis World’s Fair, which occurred simultaneously. This meant that many of the Fair’s sporting events were called “Olympic,” even when they didn’t meet Olympic standards, but it’s estimated that 91 events actually fit the Olympic criteria, with participants from 12 countries.

One of the most memorable sporting events of the St. Louis Olympics was the marathon. Run on August 30, a hot, dusty day, the marathon was full of unusual circumstances. For one, American Fred Lorz, the man who crossed the finish line first, was not actually the winner, as he had hitched a ride through the middle part of the course and then got out to run the last leg as a joke. The actual winner, American Tom Hicks, crossed the finish line practically carried by two support crew, having received small doses of strychnine (commonly used as a rat poison) to stimulate him enough to be able to run the course. 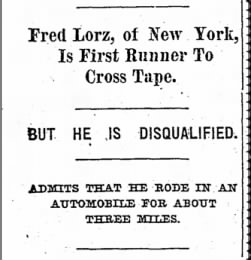 Another notable Olympic contestant was German-American George Eyser, who won three gold medals (and six medals total) in gymnastic events despite having an artificial leg. Also noteworthy was another German-American, Frank Kungler, who medaled in three different sports (tug-of-war, weightlifting, wrestling), making him the only one to do so in the same Olympics.

A controversial aspect of the games—condemned even at the time—was an “anthropological” meet, held in mid-August. Though only associated with the Olympics and not technically part of it, the meet claimed to compare the sports skills and physical prowess of various native peoples (who were part of the World’s Fair) against those of white competitors. The native competitors, including Pygmies, Patagonians, Filipinos, Native American Indian tribes, Japanese Ainus, and others, had the rules explained to them without translators and were not allowed to practice, so they were unable beat the white competitors’ records in the vast majority of events. 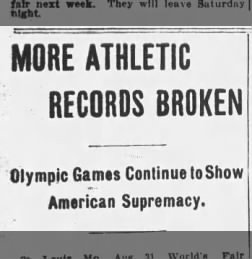 America won the most events by far at the Olympics, as the country provided more than three-fourths of the 630 athletes. America medaled 233 times, while the next highest scoring country, Germany, won only 12 medals.

Has any of your family competed in the Olympics? Tell us about it! Or learn more about the St. Louis Olympics by searching or browsing on Newspapers.com.