The Tour de France is an internationally-known competition that draws out the best and boldest in bicycle racing, but it wasn’t always so. In fact, its existence is a prime example of that old adage, “necessity is the mother of invention.”

In the years leading up to the turn of the century France had one sports paper, Le Vélo. But in 1899 a new rival popped up on the scene. This newspaper was called L’Auto, and in its early years it really struggled to compete with the more established competing paper.

What’s a struggling paper to do? Create an intense bicycle race to sell more copies, of course. 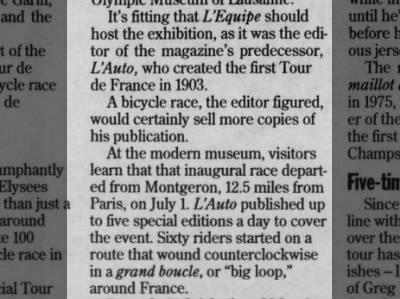 The new race circled the country, leading to the name “Le Tour de France.” It took an already popular sport and magnified it to a larger scale than had ever been attempted. So large, in fact, that only 15 people entered, undeterred by the missed days of work and small reward. L’Auto‘s editor, Henri Desgrange, decided to change things up a bit; the race would be fewer days, each competitor would get a daily stipend that equaled pay for a day’s work, and the reward for those who placed would be significant. The number of race entrants tripled. 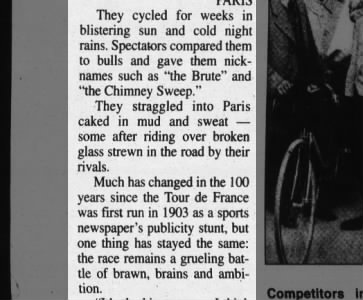 The race was brutal, and not just because of the length and terrain: there were reports of cheating by the competitors. But at the end of the race, the first Tour de France had a clear winner: Maurice Garin. He won three of the four legs of the race and came in first hours ahead of the runner-up, the largest margin of victory the race has ever had. 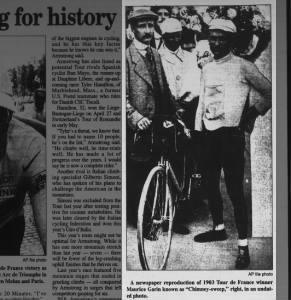 Since 1903 the Tour de France has occurred every year, halting only for the years of the two World Wars. It has garnered a lot of positive attention and called to the most competitive of cyclists, but according to one article, not everybody loved the existence of this particular competition. 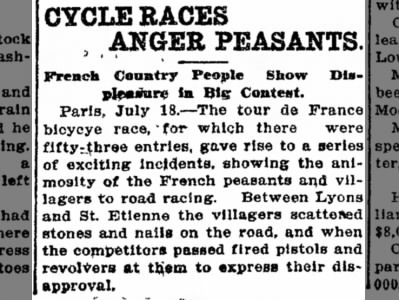 Oh, and that other paper, Le Vélo? It went out of business in 1904, a year after the first Tour de France. Meanwhile, L’Auto‘s successor, L’Equipe, is still going strong today.

Find more articles on the Tour de France and other similar events on Newspapers.com.