Won’t You Be My Neighbor?

What do Chef Brockett, Mr. McFeely, King Friday and Daniel Striped Tiger have in common? If you’re humming “It’s a Beautiful Day in the Neighborhood,” then put on your sneakers, zip up your cardigan, and let’s take a magical trolley ride down memory lane. 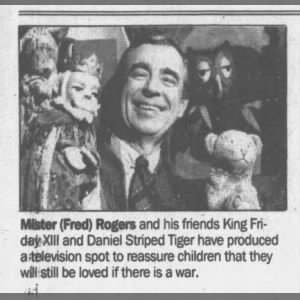 Mister Rogers’ Neighborhood first aired February 19, 1968, on black-and-white television screens. At that time, nobody could have predicted that the show would continue on for 33 seasons and nearly 1,000 episodes. Fred Rogers, with his kind and soft-spoken voice, won the hearts of children and their parents. He embraced “make believe” with his puppets and explored things that might seem strange or threatening to a child, like a visit to the doctor or physical handicaps. He promoted values and wanted children to feel safe. Early on in his career, Rogers told The Decatur Daily Review, “We are trying to build the imagination of the child. There is no real work or sport for preschoolers. Their sport and their work is their imaginative play,” Rogers said.

Rogers saw his first television in 1951 during his senior year of college. He immediately recognized that TV could be a powerful educational tool for children. In 1953, Rogers developed his first show, The Children’s Corner, for WQED Pittsburgh. He was the puppeteer, composer, and organist. The success of The Children’s Corner later led to the creation of Mister Rogers’ Neighborhood. As the show prepared to wrap its final season, Rogers gave an interview to the Pittsburgh Post-Gazette. Pointing to a framed quote on the wall that read “Life Is For Service,” Rogers said it was based on a favorite sign from Rollins College, his alma mater. “I’ve never tried to make a decision that had to do with selfishness. I think we certainly have done the kind of work I have wanted to do for children and one of the avenues has been the Neighborhood,” he said.

Rogers passed away on February 27, 2003, of stomach cancer, but his legacy continues. A documentary film commemorating the life of Rogers called Won’t You Be My Neighbor premiered in select theaters on June 8. You can find many more newspaper articles about Mr. Rogers’ Neighborhood in our archives. Do you have any memories of Mr. Rogers? Share them with us!

One thought on “Won’t You Be My Neighbor?”