The Resignation of George Washington

On this day in 1783, with the American Revolutionary War officially at an end, George Washington resigns as commander in chief. 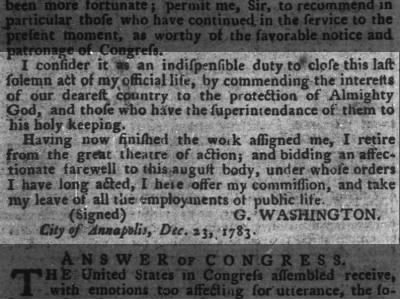 This clipping is the end of his speech, which you can see in full here.

Washington’s resignation put an end to the hopes of many politicians (and citizens) that he would lead the nation as their new king. His retirement from public life was also pretty short-lived; five years later, in 1788, Washington was elected as the first president of the United States.

See more on Washington and the early years of the United States with a search on Newspapers.com.