Herman Mudgett is the worst man you have probably never heard of, unless you happen to be familiar with his alias, H. H. Holmes.

Holmes made an appearance on Timeless this week as the show gave us a peek into the history of the World’s Fair Hotel—or as it would later be known, the Murder Castle. No spoilers about the show here, but you can probably guess from the morbidly straightforward nickname that this story isn’t going to be pretty.

The Murder Castle was originally just your usual impressive, 3-story hotel. It was built by Holmes in Chicago as lodging for visitors to the Chicago World’s Fair, scheduled to take place a handful of years after construction. But—and this is where things get weird—Holmes filled his hotel with stairs that went nowhere, soundproof and airtight bedrooms, and doors that opened onto walls, among other oddities. He was constantly firing the construction workers and hiring new ones so that no one would know the full scope of his bizarre plans. Once the hotel was built he did the same with his employees, making sure they were in constant rotation to prevent anyone learning about the alarms that tracked guests’ movements, the gas lines in the bedrooms, the sealed up brick room that was only accessible through a trapdoor in the ceiling, or what he called the “secret hanging chamber,” which needs no further explanation. 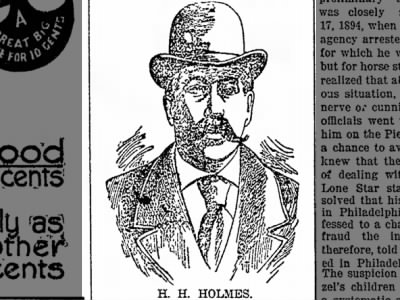 As you might expect, Holmes used his nightmarish fun house to murder people through hanging, asphyxiation, or sometimes starvation or thirst. Unbelievably, the basement of the hotel was his own personal post-murder medical chamber complete with large furnaces, lime pits and acid baths. He sold his victim’s organs to medical professionals and disposed of the remains, and somehow managed to not get caught doing any of this, for years. The World’s Fair came and went, and still he was not discovered.

He was finally arrested in Boston for another murder that was unrelated to the hotel, and authorities followed his trail back to Chicago. They discovered the Murder Castle, with its horrific rooms and secret chutes, and found human and animal bones and bloody women’s clothes inside. 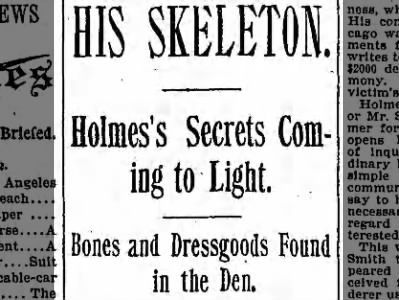 Holmes was connected to nine murders and confessed to several others. He was hanged for these crimes in May 1896, but it’s possible that during his time as a con man and murderer he may have killed up to 200 people in total. We will never know for sure. Holmes was one of the first documented serial killers, before the term serial killer even existed. And he was entirely unapologetic about it, even until the end. 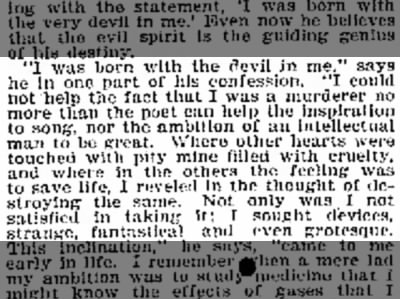 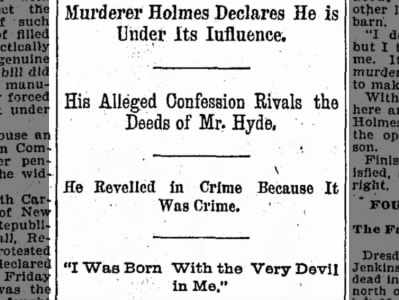 If you’re interested in this bit of history, give it a closer look. The details only get more and more unbelievable. Search for Holmes or his murder hotel on Newspapers.com for contemporary or modern accounts.

2 thoughts on “The Murder Castle”