In September 1845, Irish farmers noticed the leaves on their potato plants starting to wilt and turn black. When the potatoes were dug up, they initially appeared to be fine, but then rotted within days. A fungus called Phytophthora infestans, accidentally brought from North America, was rapidly spreading. The cool, moist climate of Ireland allowed the spores to thrive. Virtually overnight, entire fields were infected. 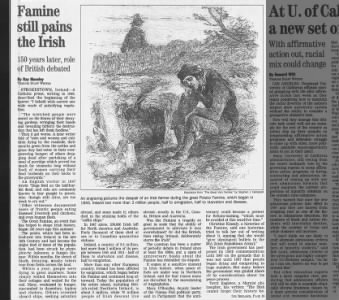 The Irish potato famine, also known as the Great Hunger, had begun. The 1851 Irish census recorded more than a million deaths between 1845-1849. A Dublin paper, The Freeman’s Journal, recorded individual parish deaths in 1847, including this parish that lost 240 members within months.

Even before the famine, Irish farmers lived in extreme poverty. They were tenant farmers, working land owned by the British. The absentee landlords collected rents, but rarely, if ever, visited their properties. Middlemen, who often managed the farms, sought to increase rents by dividing the farms into smaller parcels. The farms became too small to hire help, leaving many Irish unemployed. In order to survive, farmers had nothing to depend on but a small plot of potatoes to feed their families and livestock.

When the famine hit, farmers fell behind on rent. Some British landlords evicted starving peasants and burned their homes. The blight continued and peaked in 1847 (also known as Black ’47) because suffering was so extreme. Weakened by hunger, many Irish succumbed to starvation or diseases like dysentery, typhus, and infection.

The British response to the deepening crisis was slow. Parliament passed the Soup Kitchen Act which led to nearly 3 million people lining up each day for a bowl of soup, often their only meal of the day. Unable to keep up with demand, many of the soup kitchens went bankrupt and the government shut down the program. It wasn’t until 1997 that Britain apologized for their response to the famine, saying they had “failed their people.”

Desperate to escape the crisis, a flood of emigrants loaded in Canadian timber ships bound for North America. Passage was cheap because the ships were not intended for human cargo, and conditions were horrific. They became known as “coffin ships” because so many died during the voyage.

Starving and desperate, more than 1.5 million Irish sought refuge in the United States. Today many Americans of Irish descent can trace their heritage back to this pivotal time in history.

Do you have Irish immigrants in your family tree? Tell us their story! To learn more about the Irish Potato Famine, search our archives!