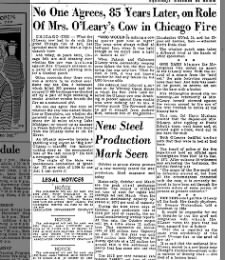 The Great Chicago Fire—a fire that would ultimately kill 300 people and destroy more than 17,000 buildings—started in a cow barn owned by Patrick and Catherine O’Leary around 9 p.m. on October 8, 1871. Although folklore states that the fire began when Catherine’s cow kicked over an oil lamp, no one really knows how the fire actually began.

It had been unusually hot and dry in Chicago, and in a city predominately built with wood, that meant the fire spread quickly. Despite the efforts of the fire department, the fire raged throughout the night, even jumping the river. Firefighters tried to fight the massive flames with their fire hoses until the city’s waterworks burned, cutting off the hydrants’ supply of water.

The huge fire burned for about another 24 hours essentially unchecked—consuming a large portion of the city, residential and business districts alike—until it began to burn itself out on the night of the 9th. A light rainstorm that same night helped douse the remaining flames. When the fire was finally out, on the 10th, an area about 4 miles long and almost a mile wide had been burned to the ground, leaving 100,000 people homeless.

Nationwide, newspapers kept their readers up-to-date on this major disaster and its aftermath, reporting the latest fire news they had received by telegraph. The papers also reported on relief efforts, as cities, businesses, and individuals across the country donated money and food to the beleaguered city. 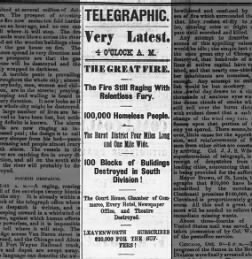 On the 11th, the Chicago Tribune published an issue packed with details of the fire, calling it “a conflagration which has no parallel in the annals of history.” (Though in fact the same day as the Chicago fire, October 8, the deadliest fire in U.S. history burned in Peshtigo, Wisconsin, killing more than 1,500 people; but that fire was largely overlooked by newspapers outside Wisconsin in favor of covering the Chicago blaze.)

Despite the devastation of Chicago’s fire, reconstruction (this time using less wood) began almost immediately and businesses quickly reopened, though many in new locations. Within a little more than 20 years, Chicago would rise from its ashes to become a booming city deemed worthy of hosting the 1893 World’s Fair.

Find more articles about the Great Chicago Fire on Newspapers.com. You might even find your Chicago ancestors in the lists of people missing or “lost and found” following the fire.