On this day in 1937, the now instantly-recognizable Golden Gate Bridge opened to the public. 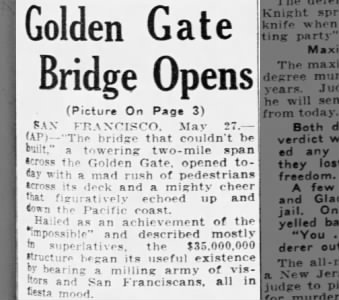 In the years leading up to its construction, the bridge was considered a nearly impossible build. High winds and thick fogs often rolled into the strait, leading professionals to believe that construction would be dangerous and possibly futile. Still, after years of planning and revisions, the project began in 1933 under the direction of Joseph Strauss, who submitted the preliminary design. This design evolved and improved with a significant amount of help from architects Leon Moisseiff and Irving Morrow, and engineer Charles Alton Ellis. The community rallied to fund the bridge’s costly construction, an admirable feat in the height of the Great Depression.

Eleven workers died during construction, ten of which were killed in the same incident in which a scaffolding fell. Strauss had come up with movable safety nets that hung beneath the work zones, but the falling scaffold broke through the net and only 2 workers were recovered alive from the cold channel waters below. The nets did, however, save many other lives during the years it took to build the bridge. 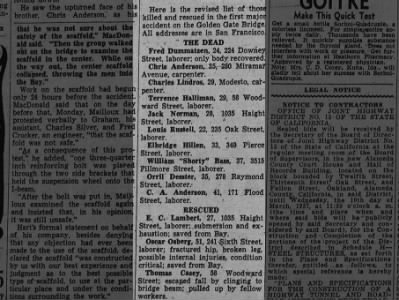 After 4 years of construction and millions of dollars, the bridge finished ahead of schedule. Pedestrians surged onto the bridge as it opened that May morning, the longest suspension bridge main span in the world at the time. The next day, May 28, the bridge was opened for the use of vehicles. 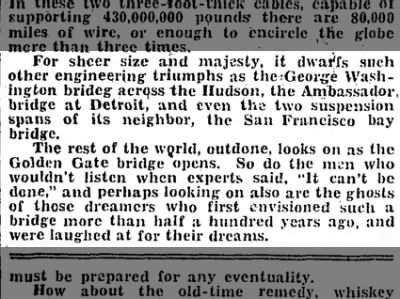 Find more on the Golden Gate Bridge and the process of building it on Newspapers.com.