Do you have ancestors from Kentucky? Then check out the Courier-Journal on Newspapers.com! 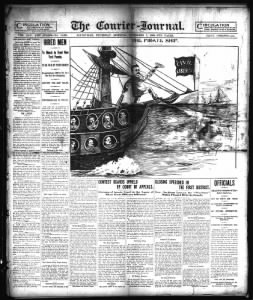 The paper temporarily ended up on rocky ground in the late 1890s due to its vocal opposition to the Democratic presidential candidate, William Jennings Bryan. When the historically Democrat Kentucky voted Republican in the 1896 election, local Democratic leaders blamed the Courier-Journal, and the paper lost advertisers and readers.

As the paper moved into the 20th century, it gained a reputation for supporting progressive causes, producing quality journalism, and standing by its sometimes unpopular convictions. The paper increased its coverage by setting up news bureaus throughout Kentucky while also emphasizing national and international news. It currently has been awarded 10 Pulitzer Prizes, the first in 1918 and the most recent in 2005.

As the main newspaper in Louisville and an important paper in the region, the Courier-Journal documented the city’s memorable moments, such as the first Kentucky Derby in 1875, the 1890 and 1974 F4 tornadoes, and the Great Flood of 1937.

If you have ancestors or other family members from the Louisville region, try looking for them in the Courier-Journal. The Sunday social pages of the paper are an especially good place to look for mentions and photos of locals. The paper also has the typical lists of births, marriages, deaths, divorces, and more.

With a Newspapers.com Basic subscription, you can view issues of the Courier-Journal from 1830 to 1922; or, with a Publisher Extra subscription, access those early years as well as issues between 1923 and 2016.

Get started searching or browsing the Courier-Journal on Newspapers.com.