Tales of Heroism from a Forgotten Tragedy: The General Slocum Disaster 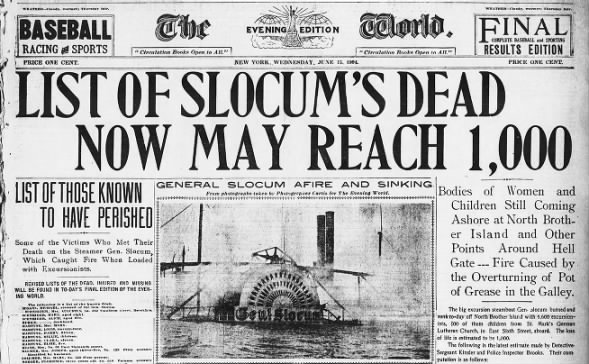 While the PS General Slocum isn’t well remembered today, the burning of this passenger ship in 1904 with the loss of approximately 1,000 lives was New York’s deadliest disaster prior to 9/11, and it remains one of the worst disasters on a US waterway.

So it’s no surprise that the General Slocum tragedy was major national news when it occurred, making headlines in papers from coast to coast. But along with the big headlines emphasizing the truly tragic nature of the disaster, another kind of newspaper coverage also appeared—stories of awe-inspiring heroism from that heartbreaking day. A search of the historical papers on Newspapers.com™ reveals many of them.

On the morning of June 15, 1904, nearly 1,400 passengers from St. Mark’s German Lutheran Church boarded the paddlewheel steamer General Slocum. The excursion vessel had been chartered to take the group—almost all of them women and children—from Manhattan to picnic grounds on Long Island. But after the steamer was underway in the East River, a fire began in the forward cabin that quickly consumed the ship.

The captain beached the burning vessel on North Brother Island, but the stern of the ship, where most of the passengers had been forced by the fire, was left in 10 to 30 feet of water. Though there were life preservers and lifeboats aboard, poor maintenance and neglect had made many of them useless. So passengers had little choice but to jump overboard without them to escape the flames—despite many not knowing how to swim.

Weighed down by their heavy clothing and struggling against a strong tide, 400 to 600 passengers drowned after the ship was beached. Though estimates vary, a government commission’s investigation into the disaster reported 955 passenger deaths—or about 70 percent. 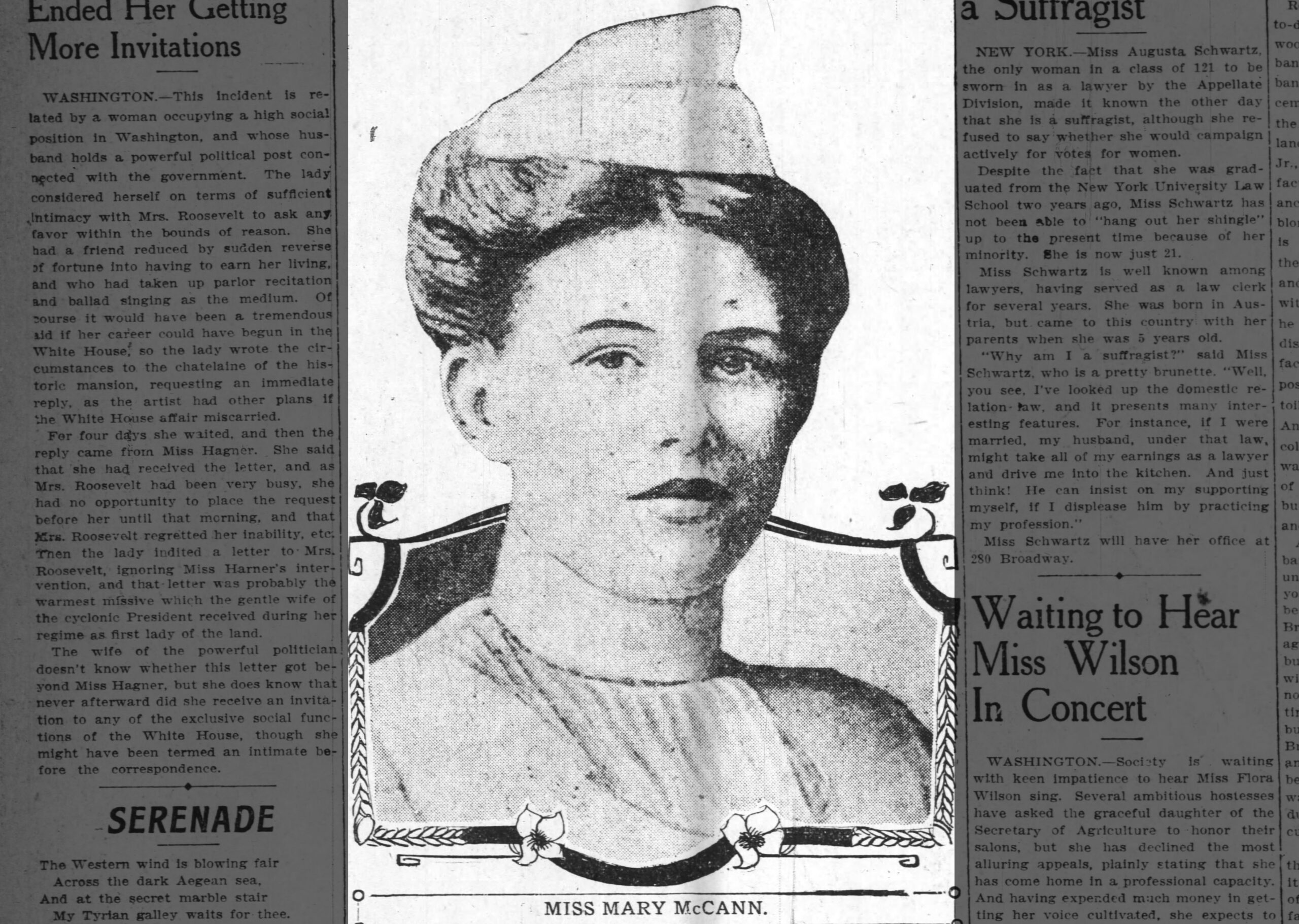 As soon as the fire became visible beyond the ship, bystanders from nearby boats and on shore rushed to aid the stricken steamer.

One rescuer story that got extensive newspaper coverage was that of teenager Mary McCann, a recent immigrant from Ireland who was recuperating from an illness at the isolation hospital on North Brother Island.

When the General Slocum came aground on the island, Mary ran to the shore and swam out time after time to pull as many children as she could to safety. Reports of the number she saved range from 6 to 20, depending on the newspaper account.

Though Mary’s story was written about in newspapers immediately following the disaster, she gained further admiration after her testimony at the coroner’s inquest a little over a week later. She appeared again in newspapers nationwide 5 years afterward, when she was awarded the Coast Guard’s Silver Lifesaving Medal in 1909 for her rescue efforts.

Other Tales of Heroism

But far more stories of bravery from the General Slocum disaster appeared in newspapers besides Mary McCann’s.

The New York Times wrote about the staff at the North Brother Island hospital, who immediately rushed to aid the beached ship. They not only pulled people from the water using ladders and human chains, but also resuscitated victims and provided medical care. The New-York Tribune described a story similar to Mary’s, in which a hospital employee named Pauline Puetz swam out multiple times to pull victims ashore, even rescuing a child who had been caught in the ship’s paddlewheel.

Rescuers on nearby vessels, from rowboats to tugboats, got newspaper coverage as well for saving lives. Henry George, for instance, saved four people from the water in a rowboat that had only one oarlock and was filling with water. He then returned to rescue others from beneath the side of the ship despite the risk of being caught under the listing vessel. The crew of the tugboat John L. Wade, which arrived within minutes of the General Slocum being beached, took their vessel so near the burning ship to rescue passengers that it caught fire itself. 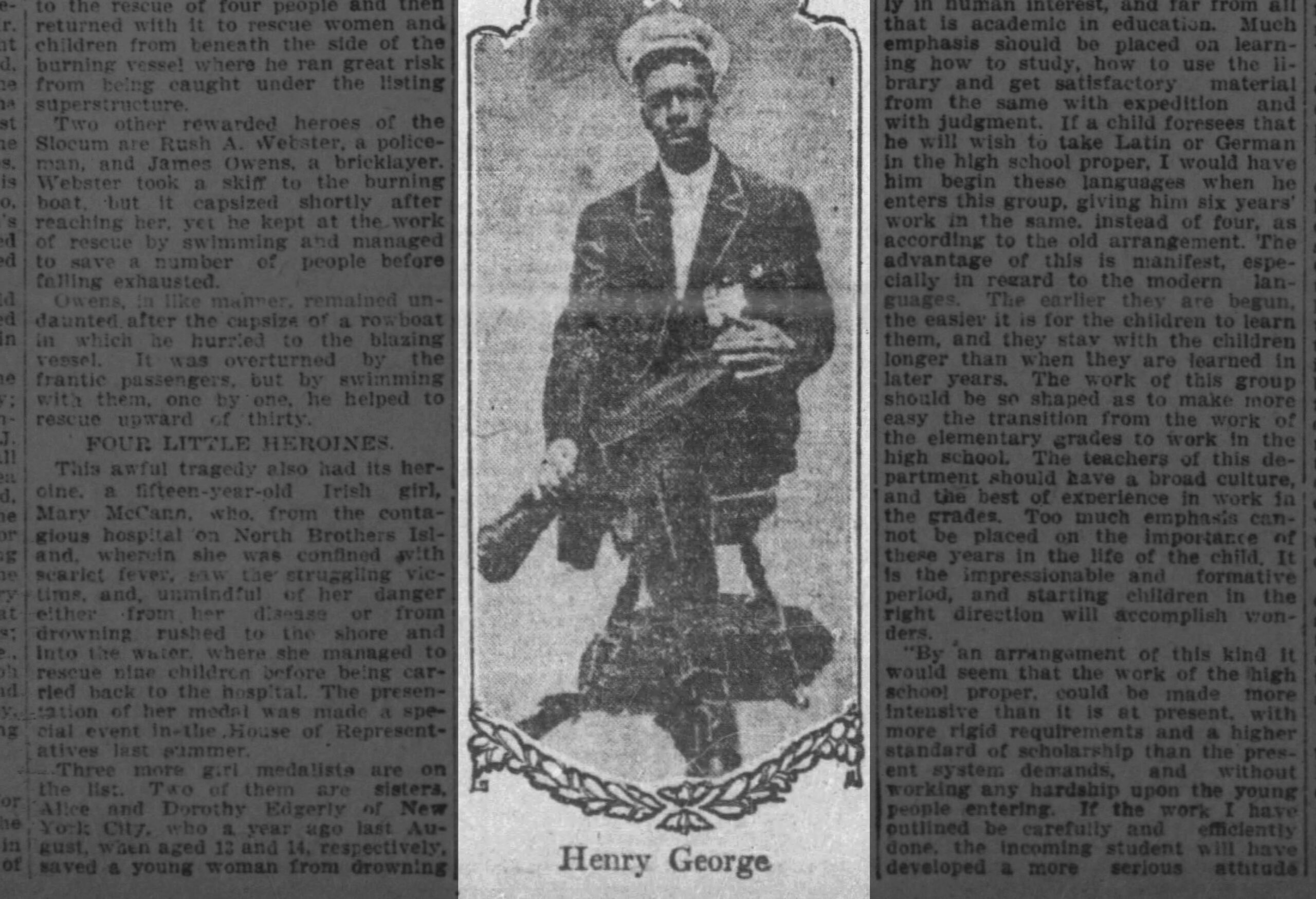 Papers also included accounts of the heroism that occurred on the General Slocum itself. The New York Evening World wrote about 12-year-old Louise Galing, who jumped into the water with the toddler she was babysitting and managed to keep ahold of the child until they were pulled from the water. The World also recounted that when young Ida Wousky would have fainted, 13-year-old John Tishner kicked his friend in the shins to wake her up. John then managed to find a life preserver and put it on Ida, pushing her into the water when she wouldn’t jump. He held onto her by her hair until they were rescued by a boat.

The stories of courage from that tragic day are numerous. Brooklyn’s Standard Union reported that six months after the disaster, the US Volunteer Lifesaving Corps awarded 250 people for their bravery. And those medals were well deserved: The government commission into the tragedy concluded that bystanders were responsible for saving 200 to 350 lives, and that without their aid possibly only 70 of the approximately 1,400 people aboard would have survived.

A century after the tragedy, in 2004, the last remaining survivor, Adella Liebenow Wotherspoon, passed away at age 100. Though her death marked the end of living memory of the disaster, the stories of the passengers and heroes of that day live on in the pages of historical newspapers.

One thought on “Tales of Heroism from a Forgotten Tragedy: The General Slocum Disaster”