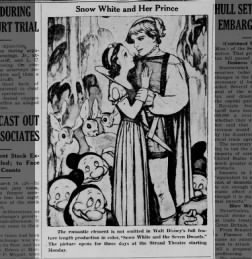 On February 4, 1938, Walt Disney’s Snow White and the Seven Dwarfs—the first full-length animated feature film—had its general release to theaters throughout the country, where it was an instant success.

Before Snow White and the Seven Dwarfs, Walt Disney had gained fame for his innovative use of sound, color, and multi-plane camera technology in animation through his animated shorts of Mickey Mouse and his Silly Symphonies. Always searching for new ideas, Disney announced to his studio in 1934 that they would be creating the first full-length animated film, based on the Grimm’s fairy tale of Snow White.

The process of making Snow White and the Seven Dwarfs would take the Disney studio three years and cost about $1.5 million—many times above the original budget. The studio grew from about 200 to 600 employees to handle the multi-step process of hand cel animation, which would eventually result in more than 200,000 drawings for the film. 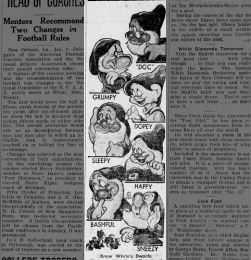 With Disney’s high standards for the film, and the animators’ and other staff’s need to innovate solutions to problems that hadn’t been encountered before, the film progressed slowly. As the date of the Hollywood premiere neared, many skeptics doubted whether “Disney’s folly,” as some called it, would be completed on time.

But when the premiere date rolled around on December 21, 1937, not only was the film complete, but the star-studded Hollywood audience loved it. The film was released to Radio City Music Hall in New York in January, where it ran for five weeks—a run longer than any other film previously shown there. Snow White and the Seven Dwarfs had its general release in the United States starting on February 4, and over the following months it played at theaters all over the country, as well as overseas. 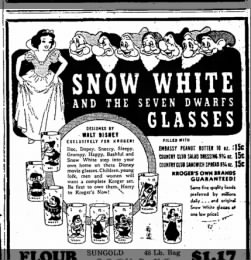 The film was a hit, receiving both popular and critical acclaim. Theaters were packed, and some had multiple runs of the film to accommodate all the fans. Snow White—themed merchandise, from hats and dolls to garden seeds and glasses, was everywhere, and Snow White and the Seven Dwarfs ended up earning $8 million (over $100 million today) in its first year. It remains one of the top grossing American films of all time.

Do you have any memories of Snow White and the Seven Dwarfs? Tell us about them! Or you can find thousands more articles about the film by searching Newspapers.com.